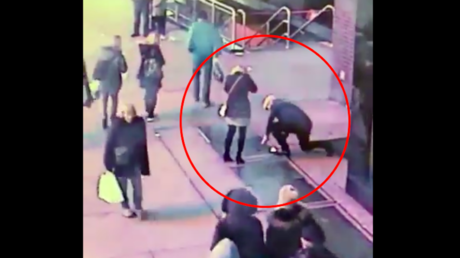 The NYPD has put out an alert for a mystery couple whose romantic Times Square proposal went seriously awry when the engagement ring fell through a utility grate, beyond their reach.

The nightmare moment was captured on CCTV on Friday night, and shows the couple who should have been celebrating instead staring helplessly down into the grate as onlookers cast curious glances their way.

It wasn’t a complete disaster, however, as the woman said yes before the ring fell through the grate and plummeted eight feet below their feet.

Although the couple gave up on retrieving the diamond-encrusted jewelry, the NYPD’s special operations unit were on the case. They managed to recover the stunning ring on Saturday, and cleaned it up.

They are now asking the public to help them find the newly engaged couple.