A rookie correction officer has been hospitalized with a broken nose and jaw, after a 24-year-old murder suspect brutally attacked and beat the man unconscious inside the Brooklyn House of Detention.

Video footage of the attack captured by one of the CCTV cameras inside the detention facility shows officer Jian Yu closing a gate during a routine patrol of the facility. As the officer was about to lock a passageway, a 24-year-old inmate, Pariis Tillery, walks up the stairs wearing nothing but a pair of shorts. Seconds later Tillery is seen cornering the officer.

Two more shirtless inmates are then seen approaching the brawl and surrounding the helpless officer, who reportedly tried to use pepper spray against them. Tillery is then seen trying to place Yu in a headlock position while repeatedly punching him in the face. The other two inmates watched on the stairwell as the beating continued. 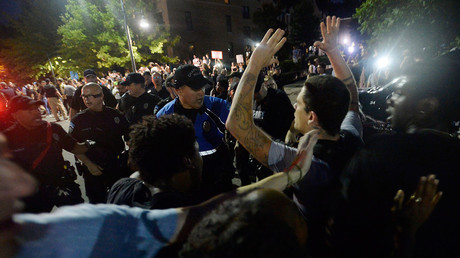 In a matter of seconds, the gangster managed to overpower the officer, throwing him on the ground before saddling him to finish the thrashing. Once Yu laid motionless on the ninth floor, Tillery casually walked away from his victim. The officer, having suffered a broken nose and jaw, was rushed to a hospital.

Yu was “beaten pretty bad”, Correction Officers’ Benevolent Association President Elias Husamudeen said Wednesday at a press conference. “He’s still in the hospital. He has a concussion [and] he’s still under observation by the hospital,” Husamudeen said, adding that at least five attacks on correction officers have been staged across the state in the past two weeks.

Tillery, a member of the Bloods street gang, was detained last year over the fatal shooting of Rysheen Ervin, 28, in Brooklyn in September 2016. The 24-year-old brute has yet to be convicted in the pending case. The inmate may face additional charges for beating Yu.