Rikers Island jail will close within 10 years to be replaced with smaller, borough-based jails, New York Mayor Bill de Blasio has announced. Prison reform advocates have pressed to close the jail which the mayor previously rejected as a “noble idea.”

The mayor’s decision, while scant on detail, comes on the heels 97-page report of recommendations from an independent commission created by the city council last year, and led by former state Chief Judge Jonathan Lippman.

Those recommendations suggest closing Rikers Island and replacing it with smaller borough-based jails at a cost of $10.6 billion over 10 years. The largest would be in Manhattan and the smallest on Staten Island.

The plan also suggested shrinking the city’s inmate population to 5,500 from some 9,000 currently, according to the Wall Street Journal.

Placing jails in the boroughs would reduce travel time to court appearances, speeding the process and saving the city money, and allow for easier visitation for family members of those in the jail system.

Today’s announcement reverses the Mayor’s previous position but does come in an election year and from increased pressure for New York Governor Andrew Cuomo and prison reform advocates over the prison.

The jail complex, operated by the New York City Department of Correction, has a budget of $860 million a year, a staff of 9,000 officers and 1,500 civilians, managing 100,000 admissions per year with an average daily population of 10,000 inmates. 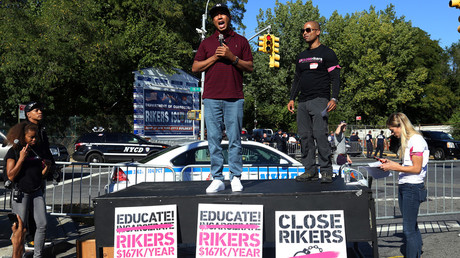 It has become a notorious place for abuse and neglect of prisoners in recent years, attracting increasing media and judicial scrutiny that has resulted in numerous rulings against the New York City government, according to criminal justice advocates.

Two of the most shocking cases were in 2014.

A mentally ill inmate named Bradley Ballard suffered a gruesome death on Rikers Island after he languished inside a jail cell for seven days. When correction officers finally came to his aid, he was naked, unresponsive, and covered in feces.

According to The New York Times, some 129 inmates, 77% of whom were diagnosed as mentally ill, suffered “serious injuries” in altercations with prison guards over an 11-month period in 2013. These injuries were “beyond the capacity” of the prison doctors to treat successfully.

In February 2014, Jerome Murdough, a homeless veteran in jail on an accusation of trespassing, was found dead in his cell. After being in jail for one week, he died from overexposure to heat. His cell was over 100 degrees Fahrenheit (37 degrees celcius), and he had taken prescription drugs which increased his sensitivity to the heat. Murdough had been complaining for hours about the heat but was ignored by prison guards.

Murdough had been arrested for camping out on the stairwell of a New York Housing Authority building during the freezing polar vortex of 2014 and his bail set at $2,500. His family sued the city and agreed a settlement of $2.25 million.

The city already has other jails besides Rikers Island – in Lower Manhattan and Downtown Brooklyn – as well as one on a floating barge off the Bronx in the East River, but those facilities total only about 2,400 beds.

The report recommends a series of steps to reduce the prison population including holding fewer people on bail, expanding diversion programs for drug offenders and those with mental illness. It further proposes changing state law to treat some low-level offenses such as fare-beating and marijuana possession as civil rather than criminal matters.

The independent commission has yet to publicly announce its recommendations which aren’t binding.