The New York Police Department is under fire once again for its treatment of the city’s homeless population. A civil rights group has filed a complaint against the NYPD for forcing the street population to “move along” when no laws have been broken.

NYPD officers, seemingly at the direction of Mayor Bill de Blasio’s office, began an effort last summer to target the community of people living on the streets in Manhattan’s East Harlem neighborhood, ordering them to move along and threatening arrests, tickets and destruction of property if the homeless refused. 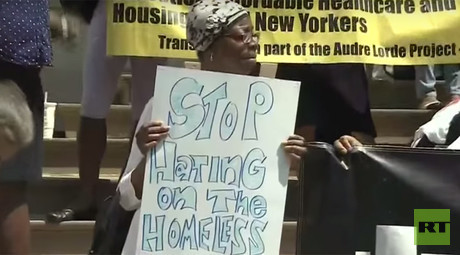 The New York Civil Liberties Union (NYCLU) filed the complaint against the NYPD on Thursday, on behalf of Picture the Homeless, an advocacy group for and including street people.. The organization argues that so-called “move along” orders violate the Community Safety Act, a law passed in 2013 to ban discriminatory profiling within the NYPD’s stop-and-frisk program and to establish oversight over the department. Housing status is included as one of the classes protected from “bias-based profiling” under the law.

“The NYPD’s practice of ordering homeless people in East Harlem to ‘move along’ when they are not violating any laws appears to be a clear violation of the Community Safety Act,” the group said in the complaint.

The document outlines several times that move along orders have been issued, and how the policy appears to come from de Blasio’s office. In July, a community affairs officer at the NYPD’s 25th Precinct told PTH staff members that there was “an edict from the Mayor’s Office,” but clarified when pressed that it “wasn’t exactly an edict, but they won’t be allowed to be there, doing what they’ve been doing,” he said, referring to a homeless encampment near the Metro North station in Harlem.

In October, a NYPD officer told a homeless PTH member that he had to move because “‘this is what they’re telling us at roll call’, implying that he was under direct order from his supervisor to order homeless people to move.”

“The statements of the NYPD officers cited above support the conclusion that the officers are ordering people to ‘move along’ because they are homeless or are perceived to be homeless,” the NYCLU argued in the complaint.

Move-along orders are “enormously disruptive and harmful for people who live on the street and do not have homes where they can seek respite from police attention,” the complaint says.

Many of the East Harlem homeless community “feel unsafe” in the city’s shelters. On top of that, there are no drop-in centers in the neighborhood.

“The police take advantage of our powerlessness as homeless people,” Chyna Burke, a PTH member, said in a statement. “Cops move us from spot to spot every thirty or forty-five minutes. I’m not doing anything illegal.”

Last June, food banks across the state of New York began running out of food due to rising need and falling benefits. By October, the Big Apple’s homeless population had neared 60,000 people sleeping in shelters ‒ approximately 40 percent of whom were children.

At the beginning of February, the mayor’s office released its year-end Shelter Repair Scorecard, which documented the conditions at each of the shelters around the city. City homeless shelters had more than 21,000 open code violations at the end of 2015, including for vermin, leaks and peeling paint, the New York Daily News reported.

Less than three weeks later, city officials gave the go-ahead to turn a Manhattan shelter for homeless women into a luxury retail store.

“The NYPD has systematically dismantled that community through its use of ‘move along’ orders targeted at homeless people who do nothing more than stand, sit, rest, or gather with friends in public spaces,” the complaint says.

The NYCLU and PTH are asking the New York City Commission on Human Rights to investigate the “pernicious practice” of issuing move-along orders.

“Each time a NYPD officer deprives a homeless New Yorker of the freedom to sit, stand, or rest in a public space, the NYPD signals that our public spaces and basic freedoms are reserved only for those of a privileged housing status. This punitive approach to our homelessness crisis violates not just our City’s values, but its law,” the complaint concludes.

The group has the backing of City Councilmember Brad Lander, a co-sponsor of the 2013 act.

“New Yorkers cannot be discriminatorily targeted for law-enforcement activity simply because they are homeless,” Lander said in the NYCLU statement. ”If there is reasonable suspicion that they have committed a crime, or are about to do, yes. But not simply based on their being homeless. That’s bias-based profiling, and it is against the law.”