New York City police shot and killed an unarmed man known to have a mental illness. A metal pipe in his hands was mistaken for a firearm, the New York Police Department said.

Saheed Vassell, 34, was killed on Wednesday in Brooklyn, New York, after four officers fired 10 shots at him. He was pronounced dead at a Kings County Hospital shortly after.

Police say the shooting,  which took place on the 50th anniversary of Martin Luther King Jr.’s assassination,  was a justified response based on the evidence received at the time. Three different people phoned 911 and described a man with a gun who was pointing it at people in the street, police said in a statement on Wednesday. 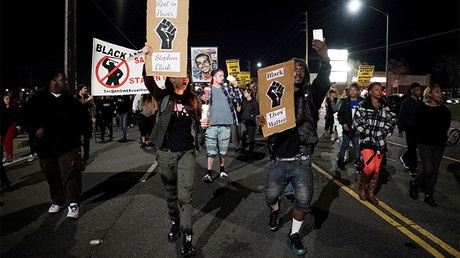 Local residents told reporters that Vassell was known as a gentle figure in the community and had never posed a threat before. “All he did was just walk around the neighborhood,” Andre Wilson told the Daily News.

“He speaks to himself, usually he has an orange Bible or a rosary in his hand. He never had a problem with anyone.“

“The officers from the neighborhood, they know him. He has no issue with violence. Everybody just knows he’s just mentally challenged. This shouldn’t have happened at all,” Wilson added.

Vassell’s father, Eric, told the New York Times that his son had bipolar disorder and had been admitted to hospital in the past after encounters with the police.

Another resident, John Fuller, reiterated that he was known by police to suffer from mental illness. “Every cop in this neighborhood knows him” he said.

The shooting in New York is the latest in a string of killings of unarmed African American men by police which has sparked fierce outrage from the public. Last month, Stephon Clark, an unarmed 22-year-old black man, was killed in his grandmother’s backyard  by Sacramento police in California. Two police officers fired a total of 20 shots at him. An independent autopsy commission by Clark’s family found most of the bullets had hit him in the back.

In 2014, the killing of Eric Garner by NYPD officers sparked national outrage. He was filmed being placed in a police chokehold despite telling officers repeatedly, “I can’t breathe” – an expression which became a rallying cry for the Black Lives Matter movement.