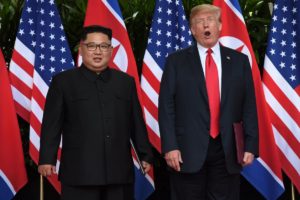 On the heels of the historic June 12 Trump-Kim Singapore Summit that de-escalated tensions between North Korea and the US, Secretary of State Mike Pompeo made his third visit to NK to move the negotiations for denuclearization and security on the peninsula forward. He met with his North Korean counterpart, Vice Chair of the Party Central Committee, Kim Young Chol, on July 6 and 7, for intensive negotiations. At the end of the meeting, on leaving Pyongyang, Secretary Pompeo declared that the summit had been conducted in good faith and that he had “made progress on almost all central matters”. Without divulging details, he stated there was more work to be done, which would be continued by working groups on both sides and that a follow up meeting had been scheduled.

The North Korean Foreign Ministry released a more sobering assessment, stating that despite high expectations after the summit they found “regrettable” the US failure to approach the negotiations in a balanced and constructive manner, and critiquing the “opposing winds” that recapitulate the “tired old process” (CVID, disclosure, verification first) that could lead to failure, and that have ignored or misinterpreted their unilateral gestures of good will, forbearance, and their desire for phased, mutual, step-wise measures based on the creation of “objective conditions for trust”.

Clearly, after the euphoria of the Singapore summit, this is a drilling down…