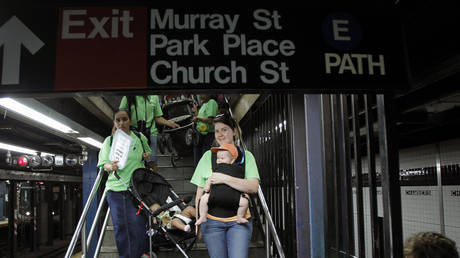 A young mother fell to her death attempting to carry her baby and stroller down the stairs to a New York subway station. Her tragedy has renewed calls to expand accessibility for the subway’s disabled riders – and mothers.

Malaysia Goodson fell onto the subway platform at the 7th Avenue station on Monday night while trying to maneuver her one-year-old daughter Rhylee in her stroller down the stairs. By the time emergency personnel arrived, Malaysia was unconscious and unresponsive; she was pronounced dead at Mount Sinai West hospital. Rhylee was found conscious and treated on the platform, then reunited with her grieving father and grandmother.

Very sad to hear about the passing of Malaysia Goodson who honestly could have been any one of us who have carried strollers up and down stairs in the #nycsubway It’s treacherous, especially for bassinet strollers. https://t.co/3lX0jSIkTB

Maneuvering a stroller down treacherous steps is a common experience for mothers in the city. The station where Goodson met her tragic end lacks an elevator, as do more than three quarters of New York subway’s 472 stations. The few elevators sprinkled throughout the system are frequently out of service, difficult to access, undersized or otherwise noxious, leaving disabled city residents at the mercy of city buses or the dysfunctional Access-a-Ride system, which can involve hours-long waits and no-shows.

Thinking of the many times strangers helped carry my stroller down the subway steps. Women always are the first to help.
Goddamn. #MalaysiaGoodson

Metropolitan Transit Authority head Andy Byford’s “Fast Forward” plan would install elevators in more than 50 stations over the course of the agency’s next five-year capital plan, on top of the 19 that are part of the current plan, eventually leaving no subway rider more than two stops from an elevator-accessible entry point by 2025 – a fantastic idea, everyone agrees, except that it will cost $40 billion and has not been funded.

Our hearts💔go out to Malaysia Goodson’s family & surviving baby. How many of us seen this danger/struggle while riding @MTA? #Access is a life or death issue.

It’s appalling #NYC can’t “find” $ for basic subway needs like elevators, but do for multibillion $ corps like Amazon😡 https://t.co/sLCWTE6PjP

The MTA is forever facing budget shortfalls after decades of mismanagement and corruption, and its oversight by state rather than city government – whose offices are located hours away from any subway stations – means funding is often an afterthought. While New York Governor Andrew Cuomo said the transit agency “must make accessibility a priority,” only he has the ability to fund it.


There has been some progress, however. Byford hired the first “senior adviser for systemwide accessibility” last year, perhaps inspired by a 2017 lawsuit filed by a group of disability organizations who allege the subway’s abysmal accessibility violates city human rights law and the Americans with Disabilities Act. That suit has reportedly been joined by the Justice Department and is still active.