National Nurses United today announced its opposition to the nomination of Oklahoma Attorney General Scott Pruitt as Administrator of the Environmental Protection Agency.

“It’s hard to recall a more dangerous appointment to public health and safety than Scott Pruitt whose entire career has been based on attacking the fundamental protections we count on to keep our water and air safe, to reduce the health impact of environmental pollution, and to limit the escalating threat to our families, and our future from the climate crisis,” said NNU Co-President Deborah Burger, RN.

“Pruitt’s nomination – as a vehement opponent of regulatory safeguards, and disdain for the clear link between fossil fuel production and the climate crisis – also dovetails to overall attack on the EPA, environmental protections, and climate action that has become a hallmark of the Trump Administration,” Burger added. Trump’s move to overturn the Obama administration’s rejection of the Keystone XL Pipeline and the Dakota Access Pipeline Project are further indications of that policy.

“Rejecting his nomination would be an important signal of opposition to this highly dangerous direction,” Burger said.

In a letter to the Senate Committee on the Environment and Public Health, Burger and NNU Co-President Jean Ross, RN, warned that “Scott Pruitt as EPA Administrator would be a disaster for the environment and public health.  Current and future generations cannot afford to have a fox minding the hen house on the important public health impacts impacted by environmental degradation and global warming.”

Yet, Pruitt as Oklahoma Attorney General has sued the federal government to block stronger regulations against fossil fuel pollution while his official biography on the Oklahoma state website boasts that he is “a leading advocate against the EPA’s activist agenda,” an “agenda, noted Burger today, that is protecting all of us.”

In a statement Wednesday, for example, the Natural Resources Defense Council noted that Pruitt has twice sued to challenge the EPA’s Mercury and Air Toxics Standards, and continues to have pending legislation against the standards. Pruitt also has ties to oil and gas industry interests and to the far right American Legislative Exchange Council. During Pruitt’s tenure as Oklahoma Attorney General, the number of earthquakes, which are widely believed to be connected directly to massive fracking in the state, have mushroomed from 63 in 2011 to 644 last year, while Pruitt has defended the industry.

Pruitt’s influence may already be seen at the EPA where a chilling atmosphere has been imposed in removing warnings about the climate crisis from its website, threats against employees who have participated in climate conferences, and just Wednesday a mandate that EPA scientific studies and date must undergo political scrubbing before it can be released to the public or media. 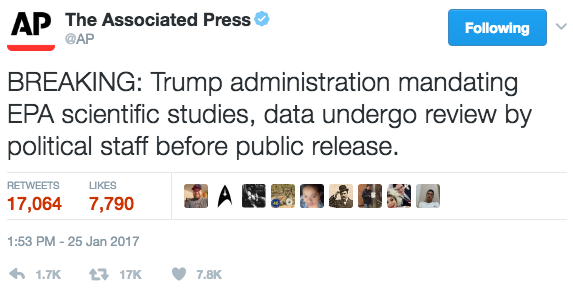 “As Oklahoma Attorney General,” wrote Burger and Ross to the committee, “Scott Pruitt has demonstrated a profound lack of concern, and even opposition to, protecting the environment. Mr. Pruitt has repeatedly challenged EPA regulations and advocated against any and all environmental protections. And his repeated actions to stymie environmental protection were revealed two years ago to be part of an “unprecedented, secretive alliance” with energy producers.

“Registered nurses,” they concluded, “know that our patients and our nation cannot afford four years of policies that will pollute our air and water, contribute to global warming, and endanger public health. We urge you to reject Mr. Pruitt to be EPA Administrator and show the American people that you are committed to protecting the environment and public health.”

Pruitt is the fourth Cabinet nominee formally NNU has formally opposed. NNU is also urging rejection of Rep. Tom Price to lead the Department of Health and Human Services, Sen. Jeff Sessions to be the next U.S. Attorney General, and investment banker Steven Mnuchin as Secretary of the Treasury.