The US has underestimated the risks to its nuclear safety as a single nuclear fuel fire could lead to fallout “much greater than Fukushima,” according to a new study. Researches slammed the Nuclear Regulatory Commission for ignoring the potential danger.

If spent fuel at one of the dozens of US nuclear sites sets alight, it “could dwarf the horrific consequences of the Fukushima accident [in Japan],” researchers from Princeton University and the Union of Concerned Scientists warned in their study published in the May 26 issue of Science magazine.

The disaster would lead to “trillion-dollar consequences,” as the hypothetical fire would result in contamination of an area larger than New Jersey and force mass relocations.

The scientists simulated a nightmare scenario in their ‘Nuclear safety regulation in the post-Fukushima era’ article. Supposing that an imagined fuel fire broke out at the Peach Bottom nuclear power plant in Pennsylvania at the beginning of 2015, and taking into account the weather conditions at that time, they showed the devastating extent of potential contamination in the area. The accident would have led to the relocation of around 8 million people and would have cost $2 trillion in damages, according to Science Daily, citing the article.

At first, it would mostly have affected a small part of Pennsylvania and Philadelphia, also touching on New York, Massachusetts and Connecticut. However, within three months almost all the East Coast from South Carolina to Maine would have become contaminated to a varying extent, the scientists said, with radiation going deeper into the land later on. 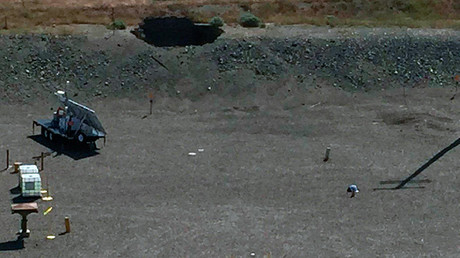 The researchers say that this frightening scenario can be avoided if spent fuel is not housed in the pools which are used at almost all US nuclear plants to store and cool used radioactive material. Instead, it would be safer to transfer it to dry storage casks after it is cooled in pools for around five years, they say. The Nuclear Regulatory Commission (NRC) previously considered such measures, but decided they would be too costly.

The study blames the NRC for downplaying the potential consequences and risking millions of Americans’ lives to favor nuclear industries.

“The NRC has been pressured by the nuclear industry, directly and through Congress, to low-ball the potential consequences of a fire because of concerns that increased costs could result in shutting down more nuclear power plants,” one of the authors of the study, Frank von Hippel, is quoted as saying by Science Daily.

“Unfortunately, if there is no public outcry about this dangerous situation, the NRC will continue to bend to the industry’s wishes.”

The researches also stressed that a nuclear disaster could be brought about by a large earthquake or terrorist attack, the possibility of which was excluded by the NRC.

They have called on the agency to take action to reduce the potential danger by enhancing the monitoring of the pools and increasing water levels in case of a breakdown. If the NRC does not act, the researchers say Congress should step up.

The NRC previously said the transfer of spent fuel, which could reduce the threat of radioactive releases by 99 percent, would require additional spending of $50 million per pool. An accident would result in $125 billion in damages and radioactive contamination would not go beyond 50 miles of the site, according to the NRC, in sharp contrast to the researchers’ estimates. The NRC also said that the consequences would be dealt with within a year, while the Chernobyl and Fukushima accidents have shown much worse effects, with the areas still deserted.

“In far too many instances, the NRC has used flawed analysis to justify inaction, leaving millions of Americans at risk of a radiological release that could contaminate their homes and destroy their livelihoods,” said Edwin Lyman, a senior scientist at the Union of Concerned Scientists and co-author of the article. “It is time for the NRC to employ sound science and common-sense policy judgments in its decision-making process,” he said.

In early May, an emergency was declared at a nuclear waste site in Hanford, Washington, after a portion of a tunnel near the plutonium-uranium extraction plant collapsed. The same site leaked gallons of toxic waste last April, affecting a number of workers.