The National Rifle Association’s executive Wayne LaPierre lashed out at “elitist” Democrats for exploiting the Florida school shooting and “hating” freedoms, while liberals reacted angrily to his call for armed guards at schools.

No love was lost between the NRA’s executive vice-president and liberal gun control supporters as LaPierre gave his speech at the annual Conservative Political Action Conference (CPAC) near Washington, DC on Thursday. The NRA executive accused the Democratic party of using last week’s Florida school shooting to abolish the Second Amendment right to bear arms.

“The opportunists wasted not one second to exploit tragedy for political gain,” LaPierre said. “The Democrats hate the NRA. They hate the Second Amendment. They hate individual freedom.” 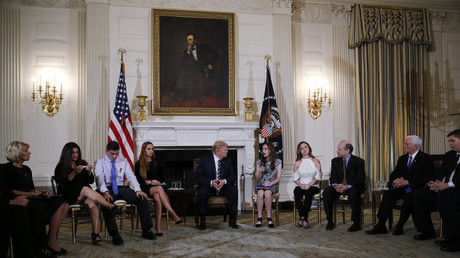 LaPierre called for “security shields” of armed guards around all schools as “the only way to stop a bad guy with a gun is a good guy with a gun.” Banks, airports, workplaces, sports events, movie stars and politicians “are all more protected than our children at school,” Lapierre said.

He went on to accuse the gun control lobby of an attempt to “sweep right under the carpet the failure of school security, the failure of family, the failure of America’s mental health system, and even the unbelievable failure of the FBI,” which admitted last week it failed to act on a tip-off about the Florida shooter Nikolas Cruz.

Liberals quickly hit back at LaPierre’s comments, in turn accusing him of using the tragedy for his own gains.

“Every day, young children are being dropped off at schools that are wide open, soft targets for anyone hellbent on murder. Schools must be the most hardened targets,” @NRA‘s Wayne LaPierre at CPAC.

Gun manufacturers would profit immensely from militarizing our schools.

Austin Stang of the anti-Trump group Gun Control Now said LaPierre “made it very clear here that the NRA is playing politics by rejecting any and all democratic ideas merely because they don’t like the Democrats.”

The @nra speech was more about rejecting democrats and socialism than protecting gun rights! He made it very clear here that the NRA is playing politics by rejecting any and all democratic ideas merely because they don’t like the democrats!! @CNNPoliticshttps://t.co/4WmrYIq5qn

NRA’s LaPierre at CPAC spoke nearly 40 mins. Defiant. Warned of socialist takeover. Also… “We must immediately harden our schools” “Schools must be the most hardened targets in the country.” Offers free NRA training to any school in America that asks for it. @nprpolitics

NRA CEO Wayne LaPierre is a champion for our rights. I have an idea. I propose raising the age to purchase a gun to whatever you agree to raise the voting age to. How is that Democrats?

One the comic relief side of things, there was former Bill Clinton White House staffer Claude Taylor claimed the NRA had received millions from… Russian President Vladimir Putin!

Is Wayne Lapierre going to talk about the millions of dollars the NRA got from Putin? Or how that money got funneled to GOP candidates?