Hundreds of Notre Dame students, staff and alumni are calling on the university president to remove murals of Christopher Columbus from the campus as they depict “the most debasing form of insult” in their portrayal of Native Americans and black people.

Around 600 protesters signed an open letter published in the university’s student newspaper, the Observer, opposing the artwork. Branding Columbus an “owner and distributor of humans as slaves,” the letter said that the murals “commemorate and laud the beginning of the centuries-long systematic removal of Native American persons and culture from the United States.” 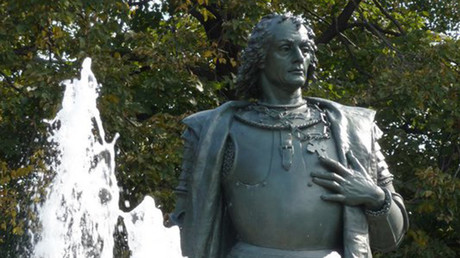 “The Native persons are depicted as stereotypes, their destruction is gilded over and their slavery is celebrated,” the letter reads.

According to the protesters, African slaves are depicted “comically, and Columbus’ incipient role in the buying and selling of humans as chattel is depicted as a holy and Christian act.”

“It is time for the murals to go,” the letter declares, adding that the paintings are “greeting millions of campus residents and visitors with a highly problematic vision of Western triumphalism, Catholic militarism and an overly romantic notion of American expansion.”

The 12 controversial paintings by Italian artist Luigi Gregori have resided in Notre Dame’s Main Building for 133 years. “The most difficult part about the murals is that they reside in the most iconic building on campus,” John Slattery, Postdoctoral professor, told WNDU. “And there’s nothing there right now that allows people to walk through without examining the murals critically.”

An informational pamphlet stands right by the murals, which supply some historical context, but for Slattery and other students, that isn’t enough. “It’s easy to walk by,” he said, noting that it’s exactly this “uncritical acceptance or examination of the murals that the signers of the letter find so problematic.”

School spokesman Dennis Brown said the paintings have historic and artistic value, and the university has no plans to remove them, AP reported.

Protests against Confederate monuments have been ripping through the US since the June 2015 mass shooting at the Mother Emanuel AME Church in Charleston, South Carolina. The shooter, who killed nine people and injured three others, said he wanted to “start a race war.”

US cities have been considering what to do with hundreds of statues and monuments to the slave-holding Confederacy. 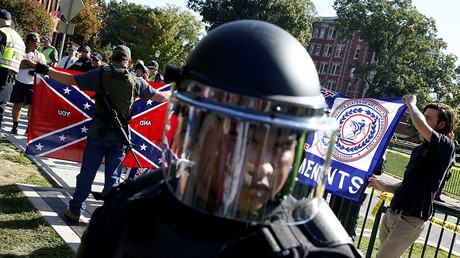 Plans by authorities in Charlottesville, Virginia to remove a Confederate statue from a city park sparked protests from Confederate and ‘alt-right’ activists, attracting counter-protesters from Black Lives Matter and the ‘Antifa’ movement. In the ensuing clashes, a 32-year-old woman, Heather Heyer, was killed when a car was driven into a crowd in mid-August.

In late August, activists in Baltimore, Maryland, took a sledgehammer to one of the oldest monuments to Christopher Columbus in the US, blaming the European explorer for racism, murder, genocide and slavery in the Americas. The perpetrators filmed the act and posted the video on the YouTube channel Popular Resistance.

“Christopher Columbus symbolizes the initial invasion of European capitalism into the Western Hemisphere. Columbus initiated a centuries-old wave of terrorism, murder, genocide, rape, slavery, ecological degradation and capitalist exploitation of labor in the Americas,” said the narrator, who introduced himself as a resident of Baltimore named ‘Tye’.