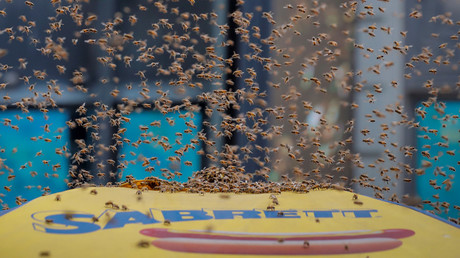 A corner of New York City’s busy Times Square was locked down after a swarm of bees appeared out of nowhere and took up residence atop a food vendor’s hot dog cart.

Video and photos from the scene showed the black-and-gold striped insects swarming near the intersection of Broadway and West 43rd Street on Tuesday afternoon, before settling down on a parasol over the food cart.

Eventually a New York Police Department roadblock was set up, and a man in protective gear removed the swarm with the aid of a vacuum cleaner.

It is unclear where the bees came from. There were no reports of anyone getting stung.