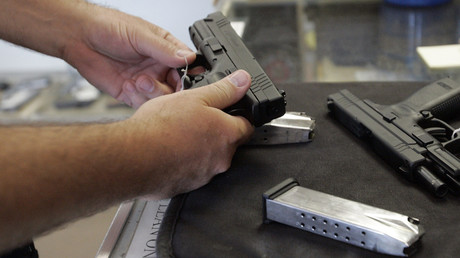 The militarization of local law enforcement in America has long been documented, but a new report found 67 federal agencies such as the IRS and Health and Human Services have spent $1.48 billion purchasing guns, ammunition and military-style equipment.

Among the startling findings in the 50-page report is that the 67 non-military agencies and 15 Cabinet-level departments have more than 200,000 federal officers with arrest and firearm authority, which exceeds the size of the entire United State Marine Corps, with its 182,000 personnel.

The documented purchases were made over an eight-year period from fiscal years 2006 to 2014. The report found traditional law enforcement agencies spent just 77 percent of that amount to make purchases totaling $1.14 billion during the same time period.

@ABC#BernieSanders hey Bernie how about stopping the militarization at Federal agencies. 45 have there own SWAT teams.

Other findings were that the Internal Revenue Service shelled out nearly $11 million on guns and ammunition for 2,316 “special agents.”

The details come from the Militarization of America: non-military federal agencies purchases of guns, ammo, and military-style equipment, published by the non-profit good government group OpentheBooks.com. The data comes from analyzing publicly available information from US government agency spending, outside the Department of Defense. The report cover carries an endorsement by former Senator Tom Coburn (R-Oklahoma).

OpentheBooks.com was founded by Illinois businessman Adam Andrzejewsk, who ran in the Illinois gubernatorial race in 2010 with Tea Party support, but was beaten by a wide margin.

Other accounts included in the report are that the Food and Drug Administration has 183 armed “special agents,” representing a 50-percent increase over the 10 years from 1998-2008.

At the Department of Health and Human Services, “Special Office of Inspector General Agents” are now trained with sophisticated weaponry by the same contractors who train US military special force troops, Andrzejewski maintained.

The report showed that in 1996, the Bureau of Justice Statistics had 74,500 law enforcement officers with arrest and firearm authority employed by federal agencies, and that number had increased by nearly 50 percent in 2008 to 120,000 officers.

Other findings include that the Department of Homeland Security has purchased 1.7 billion bullets, including 453 million hollow-points, since 2004, and the DHS estimated its bullet inventory reserve at 160 million rounds.

The report also found that federal agencies had spent $313,958 on paintball equipment, along with $14.7 million on Tasers, $1.6 million on unmanned aircraft, $8.2 million on buckshot, $7.44 million on projectiles and $4 million on grenade/launchers.

The report comes following the recent attacks on a gay nightclub in Orlando that left 49 people dead and 53 others injured, when a gunman fired on them with an assault weapon.

“As the Obama administration and its allies are pushing hard for an assault weapons ban on private citizens, taxpayers are asking why IRS agents need AR-15s,” Andrzejewski wrote in an opinion column in Forbes magazine. “After grabbing legal power, federal bureaucrats are amassing firepower. It’s time to scale back the federal arsenal.”