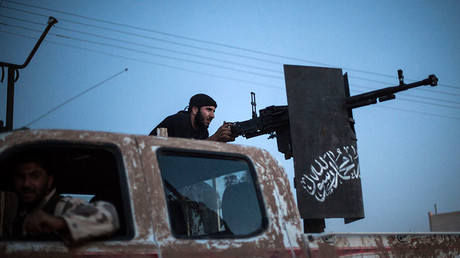 Washington will continue to back a rebel group that reportedly committed a massacre in Syria, because they were “vetted” by the Saudis and play a role in the Syrian political process, the State Department spokesman told reporters.

Ahrar Al-Sham (Harakat Ahrar ash-Sham al-Islamiyya or “Islamic Movement of the Free Men of the Levant”) is one of the largest rebel groups in Syria, and belongs to the Saudi-backed High Negotiating Committee (HNC). It is considered a party to the Syrian ceasefire, negotiated by Russia and the US.

On May 13, however, Al-Sham fighters raided the village of Al-Zara, killing and capturing scores of inhabitants. Speaking to RT Arabic, the surviving villagers described the attack as a “massacre.”

Two days earlier, Washington blocked a Russian proposal at the UN to delegitimize Ahrar ash-Sham and another group called Jaysh al-Islam, over their regular violations of the ceasefire. Britain, France and Ukraine sided with the US. On Tuesday, State Department spokesman Mark Toner defended the decision.

“Ahrar al-Sham is not a designated Foreign Terrorist Organization,” Toner told reporters, in response to a question from RT’s Gayane Chichakyan. “It is part of this vetted group of opposition forces that are part of the HNC. That was process mostly led by Saudi Arabia, but with the consent of other members of ISSG, and that includes Russia.”

Co-chaired by the US and Russia, the International Syria Support Group consists of 20 countries, including the UK, France, Germany, Italy, Jordan, Lebanon, Egypt, the Gulf Arab countries and China.

Asked to comment on a report that Labib al Nahhas, a senior official of Ahrar Al-Sham, visited Washington in December 2015, Toner cited “privacy concerns” on Monday and said he would follow up.

“I do know this individual certainly did not have any meetings that I’m aware of at the State Department,” he said on Tuesday. “I can’t speak to whether we were aware or not aware of his visit or entry into the country. I just don’t have that information.”

While condemning the atrocities in Zara, Toner attempted to diminish them by saying, “frankly, we have seen similar attacks on the part of the regime,” referring to the government in Damascus the US wants to see overthrown by the rebels.

“How many villages do they have to massacre before they become bad guys?” one reporter asked, but received no response. Neither did the reporter who asked what qualified Ahrar Al-Sham as “moderates,” when their ideology was no different from Islamic State (IS, formerly ISIS/ISIL) or Jabhat Al-Nusra.

“I don’t have the criteria, other than the fact that they were believed to be a part of the viable Syrian opposition, and that they exhibited a desire to play a positive, constructive role to resolving the conflict,” Toner said.

Asked whether the US would pressure the group to abide by the ceasefire, Toner was noncommittal.

“We’re not giving them a yellow card,” he said.

While Ahrar al-Sham is not on the US list of foreign terrorist organizations, neither were Islamic State branches in Libya, Yemen and Saudi Arabia – until last week, when the State Department officially designated them as such.

Another reporter brought up the State Department’s apparent prioritization of the “political transition” in Syria over fighting IS, reminding the spokesman that Secretary of State John Kerry argued for an “ISIS first” approach back in 2014.

“It’s hard to separate the two. We need both,” Toner said, adding that the civil war was making it “murky and difficult” to combat the terror group.

Washington is pretending that Ahrar Al-Sham and other groups are moderates because without backing the rebels, the US has no other policy option in Syria, and “they have to accept the fact that Assad is going to stay in power and the terrorists must be defeated.” former US diplomat Jim Jatras told RT. “And they cannot accept that.”