The UK will never agree to freedom of movement as part of a trade deal with the EU as cutting commerce with Europe would still be better that the current “rotten” state of things, Nigel Farage, UKIP leader, said in an exclusive interview with RT.

Farage praised the people in the UK for voting in favor of Brexit despite enormous pressure inside and outside the country.

“Oh, gosh! Who would’ve believed it?  Who would’ve believed that despite all the threats and bullying from the international community, President Obama, the OECD, [British Chancellor of the Exchequer] George Osborne, the Bank of England… who would’ve believed the British people would have the courage to say: ‘No, no, no, no. We’re not listening. We actually want to take back control of our country, our democracy and our lives.’ That’s what happened.”

The UKIP leader noted that the vote to leave the EU had already led to drastic changes across the British political landscape, with Prime Minister David Cameron resigning and Labour Party leader Jeremy Corbyn losing a no-confidence vote among MPs. 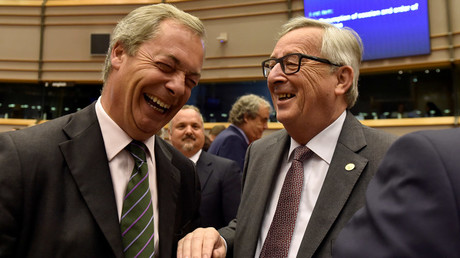 “But the effect of it here, in this place [the European parliament] is pretty seismic,” he added. The UKIP leader made a speech Tuesday to a charged assembly of MEPs gathered for an urgent discussion of Brexit.

“Isn’t it funny? When I came here 17 years ago and I said that I wanted to lead a campaign go get Britain out of the European Union, you all laughed at me,” Farage told the jeering and booing audience. “Well, I have to say, ‘You’re not laughing now, are you?’”

Farage backed the voices heard in the EU, demanding to speed up the decision making on Britain’s exit from the block.

“We voted to leave. Let’s do it. Let’s trigger Article 50. And let’s go into grown up negotiations about trade,” he told RT following the debate in the European Parliament.

But London is in no rush to activate Article 50, with outgoing PM Cameron who leaves office sometime between now and October, suggesting that it should be done by his successor.

German Chancellor Angela Merkel said Tuesday that “no formal or informal” negotiations with the UK would take place until it officially triggers the process of leaving the EU under Article 50.

However, Farage insisted that Britain would never agree to allow freedom of movement in exchange for a trade deal with Europe.

“If we reach the worst-case scenario of no deal being on offer – no deal is better for us than the rotten deal we’ve got now,” he said.

On June 23, the UK held a referendum on leaving the EU, with 51.9 percent supporting Brexit and 48.1 percent voting to remain. One of the key promises of the pro-Brexit campaign was to curb immigration into the UK from the EU.