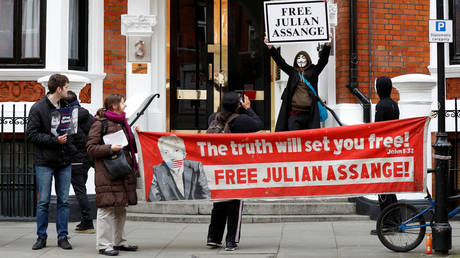 WikiLeaks’ Julian Assange is facing extradition and a trial at a US court infamous for sending whistleblowers to jail. CIA whistleblower John Kiriakou, whose case was tried there says there won’t be a fair trial for Assange.

Kiriakou was the first person to be sentenced in the US for leaking classified material to a journalist as part of President Barack Obama’s crackdown on whistleblowers. His case was heard by the District Court for the Eastern District of Virginia. He took a plea bargain in October 2012 and was sentenced to 30 months in prison.

The same court is handling the case against Julian Assange, who is alleged to have conspired with WikiLeaks source Chelsea Manning as part of her leaking the damning classified materials. Assange was arrested by the UK authorities on Thursday after Ecuador allowed British police into its embassy in London to drag the whistleblower out.

Kiriakou believes that once in US custody, Assange would face additional charges and may spend the rest of his life in jail.

“I think that there are many more charges to be considered for Julian. I would expect a superseding indictment, possibly to include espionage charges,” he told RT.

The US court that would try Assange will not give him a fair trial, Kiriakou believes. “They don’t call EDVA the ‘Espionage Court’ for nothing,” he tweeted earlier in the day. He told RT he was speaking from his personal experience.

A fair trial in the Eastern District of Virginia, under Judge Leonie Brinkema, is utterly impossible. They don’t call EDVA the “Espionage Court” for nothing. https://t.co/U6gVq2FpcB

“Judge Leonie Brinkema is a Reagan appointee to the federal bench and she was promoted to District Court bench by Bill Clinton in the mid-1990s. She reserves all national security cases for herself. She handled my case, the Jeffrey Sterling case [over leaking details of a CIA op to journalist James Risen], she is Julian’s judge, she has reserved the [NSA whistleblower] Ed Snowden case for herself,” he said.


“No national security defendant has ever won a case in the EDVA. In my case, I asked Judge Brinkema to declassify 70 documents that I needed to defend myself. She denied all 70 documents. And so I had literally no defense for myself and was forced to take a plea.”

Kiriakou said he hopes that the way Assange is being treated by the US justice will galvanize the US public and result in more documents being leaked to expose the misdeeds of the US government.

Critics of the US case against Assange, like Kiriakou, say all he has been doing was publishing material of public interest, which was also embarrassing to the US government. This is exactly what journalists in the US have been doing before him when they reported major scandals in cases like Watergate, Pentagon Papers or Iran-Contra.

“If Julian Assange as publisher and journalist is prosecuted, then there is literally nothing to stop the government from prosecuting journalists at the Washington Post and the Wall Street Journal and the New York Times and anywhere else,” he warned.