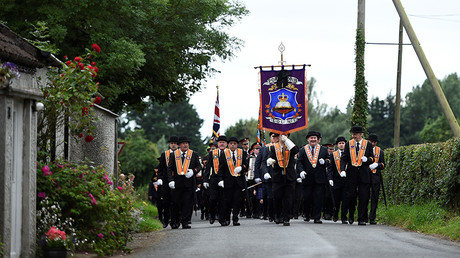 Northern Ireland’s Orange Order has instructed its members not to use “RIP” to commemorate deaths – a move that has been met with incredulity online.

The bizarre diktat was issued in a special Reformation anniversary edition of the Orange Standard, a magazine for members of the Orange Order.

‘Orange Order calls on Protestants not to use ‘RIP’ as it’s unbiblical, un-Protestant, and a form of superstition connected to Catholicism.’ pic.twitter.com/P1b7tdqyz4

The magazine piece points out that RIP is an abbreviation of “rest in peace,” or “requiescat in pace” in Latin.

“[These terms] have long been used by the Roman Catholic Church and can be frequently seen, for example, in death notices and gravestones,” the article reads, before adding that the souls of those who refuse the offer of salvation will be “lost in hell forever.”

“This is what the Bible teaches, and there is no Biblical warrant for praying for the dead or for wishing that their soul might ‘rest in peace,’” the piece adds.

Speaking to the Impartial Reporter, County Grand Master of Fermanagh’s Grand Orange Lodge, Stuart Brooker, said the article “clearly explains why Protestants and members of the Orange Institution should not use the term ‘RIP’.

“For guidance on any matters like these we should refer to what the Bible teaches.”

The @OrangeOrder has told members not to use “RIP” The whole protestant work ethic phyilosophy is to be employed even after death.

The Orange Order want protestants to stop using RIP on social media and in general, apparently the phrase has its roots in Catholicism. pic.twitter.com/XHmXPFCZqi

Reaction to the comments have been typically scathing online.

Orange Order -“why does everyone demonise us?” Also the Orange Order – “don’t use RIP cause it’s papish”

The organisation that deems ‘RIP’ as too Roman is tackling sectarianism? Interesting concept!

Did I mishear? Have I dreamt it? Protestants urged by Orange Order not to use “RIP” because it is Catholic hocuspocus.