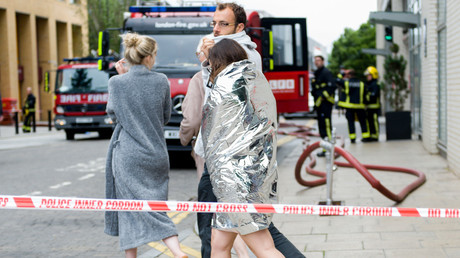 A large, “nasty” fire broke out at a 20-story tower block in east London during the early hours of Thursday morning, exactly a year after the Grenfell blaze claimed 72 lives.

Some 150 residents left the Roma Corte building in Lewisham before firefighters arrived at around 4:15am. They expressed concern that the alarm had failed to go off, claiming that they were instead awoken by the noise of panicked people shouting.

Up to eight fire engines and 58 firefighters raced to the complex in Elmira Street, Lewisham in south east London.

Ambulance crews and police were also at the scene of the fire, which broke out on the anniversary of the Grenfell fire that killed scores of people in a 24-story block in north Kensington.

Resident Yusif Ali tweeted: “Fire in #RomaCorte building Lewisham and no fire alarm was set off.

“Instead get woken up to the sound of people screaming there was a fire. Horrible!”

Lewisham fire has interesting similarities to Grenfell where there was no single central alarm, by design. https://t.co/5YA6QwwpG8

Fire in our block of flats this morning – emergency evacuation alarms ‘failed’, evacuated by friendly neighbours, all safe and well #fire#lewisham#barratthomes

Mayda, another witness, also tweeted: “Woken up by the sound of London Fire Brigade trucks. There is a nasty fire in a new build, Roma Corte, in #Lewisham. People have evacuated to nearby Cormill Gardens. Get out if you haven’t. Hope everyone is safe!”

While another local said: “Woken up to the sound of people screaming there was a fire. Horrible!”

A statement from the London Fire Brigade said: “Eight fire engines and 58 firefighters and officers have been called to a fire in a flat in Elmira Street, Lewisham.

“The Brigade was called at 0414. Firefighters from Lee Green, Deptford, New Cross, Forest Hill, Lewisham and surrounding fire stations are at the scene. The cause of the fire is not known at this stage.”