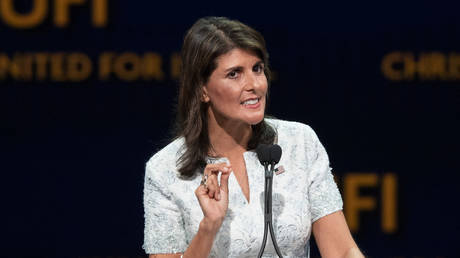 Nikki Haley has begun her political second act with the launch of Stand for America, an anodyne-sounding policy group she formed to oppose socialism and term limits at home, and Russia, China and Iran abroad.

The former UN ambassador and Kissinger protégé announced her new project in a tweet, promising to “focus on how to keep our country safe, strong, and prosperous” and linking to a website where visitors could join “Team SFA,” pick their favorite issue, and even contribute – because where would a campaign website – er, policy institute – be without a space to enter credit card details?

Haley insisted she is not running in 2020 or 2024 in a Monday interview with the Washington Post, claiming she will be involved in the Trump/Pence 2020 reelection effort in some way. Stand for America is classified as a social welfare group – meaning it cannot endorse candidates, raise money for her own political use, or make political donations – and she even told the Post her group will “back Democratic proposals” when they “help the debate.”

Still, the neocon darling’s chosen slate of domestic issues like “American culture” and “border security and public safety” along with a trendy jab at “socialism” and the obligatory reference to “international dangers” Russia, China, and Iran seemed designed to appeal to the broadest cross-section of Republican voters, and many of her fans certainly saw the move as a bid to position her future presidential campaign.

Does it also qualify as an exploratory committee for a 2020 run???

It’s like a political movement that says all sorts of common sensical, smart things, that can be repurpose into a campaign slogan and site on a moment’s notice.

Either way, this looks great at first blush.

Some even offered her free advice.

Start with the American school system. Trash the one we got and start with one that teaches reading, writing, real arithmetic, and real history. Not the liberal crap that is taught today.

Not everyone was thrilled, however

Yeah she would be great a full on Empress for the crumbling American Empire. I wonder how many wars she would start ?

Uh, Nikki could not run a bake sale, let alone our country.

And a couple of people were clearly lost.

What about inequality, taxes and climate change?