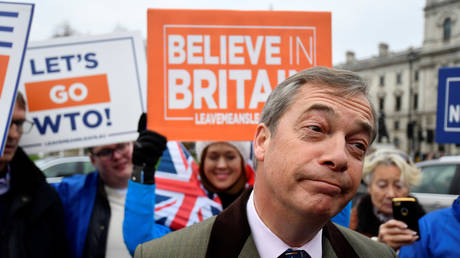 A new referendum on Brexit, reportedly desired by the UK elite, would result in even bigger support for leaving the EU, former UKIP leader and one of the party’s founders, Nigel Farage, has said as Theresa May’s plan flopped.

The government’s astounding defeat in the House of Commons, which was the worst in history in terms of the losing margin, drew fire for the prime minister from all political flanks. One of the most prominent pro-Brexit campaigners, Farage, did not stay silent.

“A catastrophic failure of leadership by Theresa May. If she has any sense of honor then she will resign,” he tweeted.

The politician has posted a video that was recorded before the vote, in which he correctly predicted May’s deal flopping in parliament and warned his supporters of the apparent desire of the political elite to “start to push towards a second referendum” on the UK-EU divorce.

“It is quite possible that we could leave with no deal on WTO, and as far as I’m concerned, no deal – no problem. But it is more likely that many in our political class will try to weasel their way out of this,” Farage warned.

Even if Westminster manages to push through a new Brexit referendum, a new vote would actually show even bigger support for the idea of leaving the EU, Farage argued.

“The British may be a very placid people, very laid back, but I promise you: if they get pushed too far it’s a lion that will roar. We will be even more defiant if we have to fight a second referendum and we will win it by a bigger majority,” the politician said on Wednesday.

Also on rt.com
What’s next for Brexit & Britain after UK Parliament voted ‘no’ on Theresa May’s deal?


May’s Brexit deal, painstakingly agreed with the EU last year, was crushed in parliament on Tuesday by 432 to 202 votes. The overwhelming rejection to the plan prompted Labour leader Jeremy Corbyn to table a no-confidence motion, which is to be debated on Wednesday evening.