Ex-UKIP leader Nigel Farage is dating a French politician 16 years his junior, according to a glamor model he allegedly “snogged and groped” on a first-class flight from the US 10 days ago. 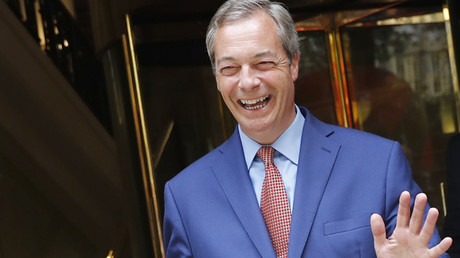 Ferrari had already been spotted some months ago leaving Farage’s £4 million (US$5 million) rented home in West London.

But Farage dismissed speculation at the time as “crackers,” saying there is nothing more between them than a “working relationship.”

“She is someone I have worked with and known for a long time who wanted somewhere to stay for a week that wouldn’t cost her any money,” he said, according to the Daily Mail.

“It’s a working relationship. You can inflate it however you want to.”

Farage reportedly met Ferrari 10 years ago when she was a waitress in Strasbourg, France.

Ferrari, 37, was also recently spotted coming out of the Chelsea home and pictured buying newspapers before making her way back to the property.

Meanwhile, Fox has defended herself against claims by Farage that she had tried to hit on him in the cabin of the Virgin Atlantic plane 10 days ago, insisting instead they were merely “feeling each other up,” according to the Sun on Sunday.

“He had absolutely no qualms about anyone else seeing us together.

“Our hands were everywhere.

“We even joked about having a quickie in the toilet but the cabin crew were constantly around.

“We thought they were genuinely checking we didn’t join the mile-high club,” the paper reported.

The revelation was first leaked by one of Fox’s friends, who said the two had been “snogging and touching each other.”

In response, Farage, 53, said: “A person you meet on a plane gets over friendly with you and you drop them off and that is the end of it.

“If you are well-known, people are coming up to you all the time,” he said, according to the Daily Mail.

He added that Fox, reportedly a former escort, had been the one making the advances, and said: “It’s all a set-up, isn’t it?”

Fox said she was not looking for fame but had to protect herself from unfair claims by Farage.

“I’ve no need for fame, money or publicity – but when my character is being attacked and I’m accused of some sort of ‘set-up’ then naturally I’m going to defend myself.

“I can’t say I’m surprised he is denying it. Everything that happened that night on the plane and in my flat was consensual and true,” the model told the Sun on Sunday.