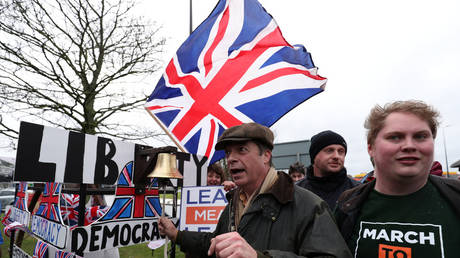 Former UKIP leader Nigel Farage has announced that he will lead his new Brexit Party into the European elections if UK MPs decide to delay Brexit beyond May 22.

Farage, who has ostensibly appointed himself leader, told various media, including the BBC and Sky News on Friday morning: “I will take over as leader of the Brexit Party and lead it into the European Elections.”

It comes after the Brexit Party’s leader, Catherine Blaiklock, quit over a series of alleged Islamophobic statements and retweets of far-right figures on social media.

It is not yet known if Farage has officially been elected as leader, as the party does not, as yet, appear to have a formal infrastructure to conduct such a vote.

The right-wing MEP vowed to put out a whole host of Brexit Party candidates if the UK participates in the upcoming EU elections in May, adding: “If we fight those elections, we will fight them on trust.”

Also on rt.com
‘No deal’ Brexit set for April 12, unless May unites British MPs to win extension for 40 more days


On Thursday night, the EU agreed to PM May’s request for a delaying to Brexit beyond the March 29 deadline. Brussels announced two new exit dates depending on what happens next week in the UK parliament.

The UK will have to leave the bloc on April 12 unless British MPs agree to May’s Brexit deal. If the withdrawal agreement is passed by next week, EU leaders have agreed to grant an extension until May 22.