Pimpled teens who haven’t seen sunlight in days: that’s the stereotype often associated with video games. Now virtual reality is revolutionizing the industry, allowing Brits of all backgrounds to immerse in digital worlds, and it could be good for them.

Instead of using VR to cut gamers off from society, Russian filmmaker and curator of Russian VR Seasons, Georgy Molodstov, is turning the industry on its head – showing the UK this week just how powerful a tool VR can be to connect people.

“[We] have the chance to show this new genre, this new thing that isn’t existent a lot in the world now and show it at the very beginning,” Molodstov said. “It’s like the [invention] of the train, that’s the phase we are at now.”

Russian VR Seasons creates dynamic, immersive films. You can visit space, go snowboarding, or even go back in time. While his immersive film projects may be fun, Molodstov is making a big difference in the life of Russia’s disabled, who are often still marginalized in society. With the help of virtual reality, Molodstov has given some disabled Russians the chance to fly, to run, to zoom around an ice-skating rink – whilst staying safely within their comfort zone. 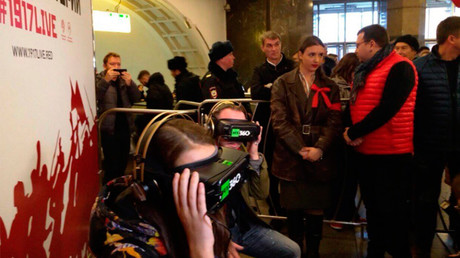 “I’m [targeting] the guys in wheelchairs who are participating in sport activities,” Molodstov said.

“I have been showing these works to people with disabilities to try and encourage them to try sport activities that they are not active with. The immersion of VR headset… they can feel how movements and how active this disability sport is and could get interested in doing it in real life.”

As well as his work with the disabled, Molodstov is also reinventing how we watch cinema. People can watch the same immersive film and have a different experience entirely.

“VR is called a social disaster because it’s disconnecting people but what we have [at film week] is a simultaneous screening,” he said.