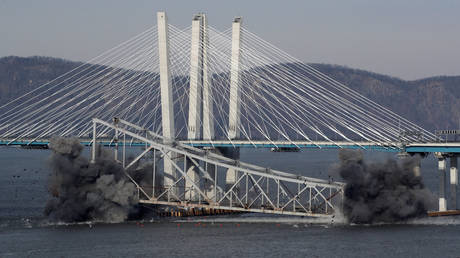 New York’s Tappan Zee Bridge, a rusty steel relic of a bygone era spanning the Hudson River north of Manhattan, has finally been demolished to make way for its shiny replacement.

The Tappan Zee Bridge was supposed to be quietly dismantled and shipped down the river on barges last September to minimize impact on local marine life. But as the opening ceremonies for the new bridge came to a close, after Governor Andrew Cuomo had driven across the old bridge with his mother, workers heard a “loud pop” come off the structure. With the rusty old span declared structurally unstable and off-limits to workers, the only option was to forget the fish and blow it up.

Explosives placed around the columns brought the old bridge down in near-perfect symmetry with a loud boom that could be heard from miles away, bringing the span to rest just below the surface of the fast-moving Hudson, enveloped in clouds of smoke.

The three-mile Tappan Zee was replaced in 2017 by the Gov. Mario M. Cuomo Bridge, named after the three-term New York governor whose son now holds that role. The 62-year-old bridge, which connects Westchester and Rockland Counties, had been a source of concern for state authorities for more than a decade before its replacement, particularly following the collapse of the Mississippi River Bridge in 2007. Traffic on the span far exceeded its capacity and poor design led to twice as many accidents as elsewhere on the New York Thruway system.

Construction on the new bridge began in 2013 and was plagued by delays and setbacks, including the collapse of a construction crane. It’s still not technically done, as a piece of the old bridge remains on the Rockland County side. A date has not been set for the demolition of that section, though it is hoped it can be dismantled and shipped down the river in a civilized fashion. The pieces of the bridge will be salvaged and recycled – but unless you’re planning to make public art with it, you can’t have one.