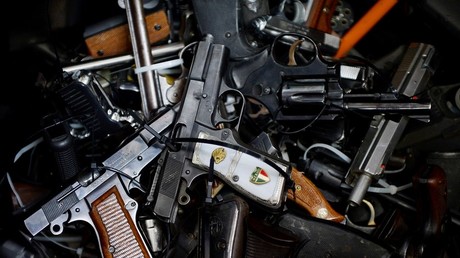 If state lawmakers get their way, New Yorkers wanting to buy a handgun might need to hand over their social media passwords and search history for a government ‘audit’ first.

A proposal by Brooklyn-based state Senator Kevin Parker and Borough President Eric Adams, both Democrats, would have the state government reviewing one year of Google, Bing and Yahoo search history of would-be handgun buyers.

The “social media review” would also cover three years’ worth of posts on social media sites like Facebook, Twitter and Snapchat, which would be scrutinized for language containing racial/gender bias, slurs, threats and terrorism, according to WKBW-TV in Buffalo.

The proposed measure has run into a hail of criticism from gun rights advocates, with several attorneys pointing out it would run afoul of the US Constitution.

In plain English, this ranges from the issue of freedom of speech and the right to bear arms, to the right to due process, guarantee against unreasonable search and seizure, and equal protection of the laws.

New York legislators want you to turn over years of your social media history before you purchase a firearm? What kind of police state crap is this? 👇🏻 https://t.co/rdmLQ60D5J

There is even a specific Supreme Court precedent going against the proposed law, attorney Sheldon Boyce pointed out.

“In the case of Heller vs District of Columbia in 2008, the US Supreme Court held that the possession of a hand gun in the home is a fundamental constitutional right so anything that infringes upon that right is subject to challenge,” Boyce told Buffalo’s WIVB-TV.

Also on rt.com
‘Government has nukes’: Democrat congressman tells gun owners to disarm, or else


Critics of President Donald Trump have repeatedly accused him of lying and exaggerating when he told supporters Democrats were gunning for the Second Amendment. Earlier this month, however, Congressman Eric Swalwell advocated outright gun confiscation modeled after Australia, and told critics that firearm ownership was no defense against tyranny because the “government has nukes.”