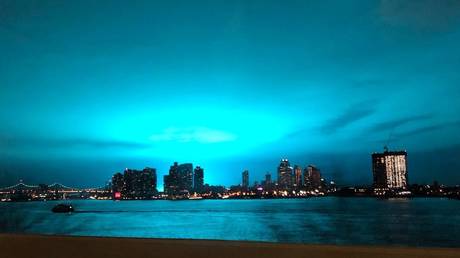 An apparent transformer explosion at the Consolidated Edison energy company has lit up the skies over New York city, shocking witnesses and prompting authorities to dispatch emergency crews to dim the blue flame skyline.

Neon blue streaks that could be seen from miles away over the Astoria neighborhood have scared New Yorkers, who were quick to post pictures of the alien-like shining. Some reported hearing humming and an unusual, psychedelic glow of colors.

Equally alarmed by the phenomenon, the city’s authorities dispatched police units and fire trucks to the Consolidated Edison energy company plant in Queens, to deal with “an apparent transformer explosion,” Mayor Bill de Blasio tweeted, in an effort to quell public fears.

People describe hearing a boom, feeling a vibration and seeing the sky turn green. Again —we are told it was a transformer explosion at a @ConEdison building in Astoria, Queens. I’m heading in that direction with my @CBSNewYork crew. Will update here. pic.twitter.com/gdGCjVWVfS

“There are no injuries reported,” the New York fire department said, noting that the situation is under control.

The public is being advised to avoid the vicinity of the power plant on 20th Ave and 31st Street.

“The lights you have seen throughout the city appear to have been from a transformer explosion at a Con Ed facility in Queens. The fire is under control, will update as more info becomes available,” the NYPD said.

The NYPD was also quick to reassure the public that aliens have not invaded the Big Apple.

The scattered power outage has also interrupted traffic at LaGuardia Airport, with only certain flights allowed to depart.