Taxi drivers held an emergency protest outside City Hall on Wednesday following the recent suicide of Nicanor Ochisor, a 65-year-old yellow-taxi driver, who took his own life at his home in Queens. He is the fourth driver to die in four months.

Cab drivers want the city to introduce tougher regulation on ride-sharing companies like Uber and Lyft in order to limit the number of cars and establish fair pricing. They placed white flowers on four mock coffins to draw attention to the deaths of the drivers, Nicanor Ochisor, Douglas Schifter, Alfredo Perez and Danilo Corporan Castillo.

“We are sick and tired of burying our brothers.” New York Taxi Workers Alliance President Bhairavi Desai reportedly told the assembled crowd. He called on City Hall to “act now.“ 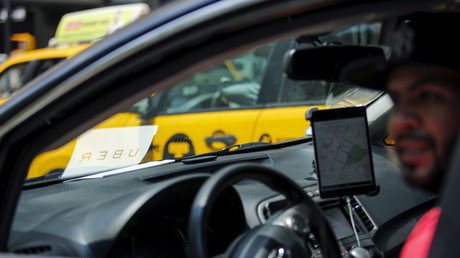 “We are deeply saddened and our thoughts are with the families,” an Uber spokesman told RT on Thursday. They added that the majority of Uber trips “are happening outside of Manhattan, where we are seeing the fastest growth.”

Yellow cabs in New York are stringently regulated, with city authorities determining their fares and the number of vehicles on the road. In order to operate a cab on New York highways, drivers require a city-issued permit, known as a “medallion.” These  are usually purchased with a loan and used to cost anywhere between $250,000 and $1 million. Medallions were seen as a solid investment because they would guarantee a reliable income and their numbers were capped by the city to avoid oversupply.

However, with the advent of ride-hailing apps such Uber and Lyft, increased competition for rides means that taxi cabs are taking fewer passengers and making less money. Many drivers are falling behind on their medallion loan repayments.

The Alliance states on its website that “The Uber/Lyft & co. Wall Street business model is killing us,” citing falling wages that they claim are pushing cab drivers into bankruptcy.

In addition to this, the value of medallions has tanked, meaning they cannot be sold on without incurring a huge loss for drivers. In January, seven medallions sold for less than $200,000 each.

Ride-sharing apps Uber and Lyft require no such permit for drivers. New York City caps the number of yellow cabs at under 14,000 but there is no limit on the number of drivers for Uber, Lyft, or other ride-sharing services. Beleaguered cab drivers fear that without intervention, New York’s iconic yellow cabs will be squeezed out by market saturation.