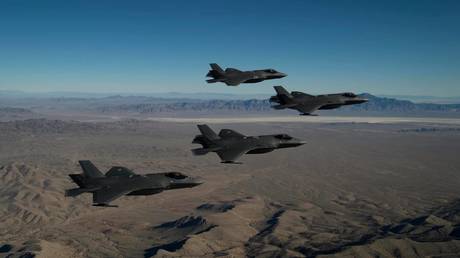 Adding to the pile of flaws and setbacks plaguing the F-35 joint strike fighter, a new report by the Pentagon reveals that jet’s life span is nearly four times shorter than expected and the accuracy of its guns is “unacceptable.”

The number of F-35s ready to fly remained “flat” for past three years and there was “no improving trend” in 2018, Robert Behler, the director of Operational Test and Evaluation (DOT&E) at the Pentagon, wrote in this week’s report.

In fact, the average availability rate of F-35 jets didn’t hit the “target value of 60 percent,” which is also “well below [the] planned 80 percent” needed for efficient testing and pilot training, according to the military’s assessment.


In addition, the tests revealed that the life span of early-production models is far lower than the expected 8,000 flights hours, and “may be as low as 2,100 flight hours,” the document reads.

The planes’ weapons system contained flaws too. During testing in September, the Pentagon found that the accuracy of the gun fitted on the F-35A to be “unacceptable” and inadequate to “meet the contract specification.” Some adjustments were made to the gun aiming cues, but “no software or hardware corrections have yet been implemented to correct the gun accuracy errors,” the officials concluded.

The DOT&E further noted that some of the “vulnerabilities” in the plane’s cybersecurity uncovered earlier “still had not been remedied.”

The US has gone out of its way to showcase the F-35s, which they are actively trying to sell to its allies, as the most effective and lethal component of the nation’s air force.

But in reality, a long string of official and unofficial reports have indicated that the whole project has been riddled with flaws in design and performance.

Last year, the military confirmed that a sizeable portion of the F-35 fleet had been grounded due to maintenance issues and safety concerns. The nonprofit watchdog, the Project on Government Oversight (POGO), alleged that the Pentagon might be concealing “life-threatening” deficiencies that plague the aircraft.

Dubbed America’s ‘most expensive’ weapon system ever for its exuberant cost – expected to surpass the $1 trillion mark, by some estimates – the F-35 development was also marred by numerous delays.

In January, citing its own sources, Politico reported that the Pentagon’s acting chief, Patrick Shanahan, slammed the jet fighter as “f***ed-up,” calling the project “unsustainable” and claiming that its manufacturer, Lockheed Martin, “doesn’t know how to run a program.”

Nevertheless, the Pentagon continues to rely on the F-35, hoping to fix its flaws in the future, and so does Lockheed. The jet’s testing “gives the men and women who fly the F-35 great confidence in the aircraft’s performance today and for decades to come,” the company’s vice president and the project’s lead manager, Greg Ulmer, has said.

Meanwhile, in an apparent setback for F-35 sales, Germany’s Luftwaffe decided it’s not interested in getting them as a replacement for the aging Tornado fleet. Boeing’s F/A-18 Super Hornet is another candidate, and with Shanahan being a former Boeing executive, one would not think the Pentagon would be asking them to reconsider.