This week, following the recent announcement of a new National Defense Strategy that focuses on conflicts with great powers and a new arms race, the Pentagon announced an escalation of nuclear weapons development. The United States’ military is spread across the world, including several dangerous conflict areas that could develop into an all-out war, possibly in conflict with China or Russia. This comes at a time when US empire is fading, something the Pentagon also recognizes and the US is falling behind China economically. This is not unexpected considering that one year ago President Trump sought an inaugural parade that put tanks and missiles on display. 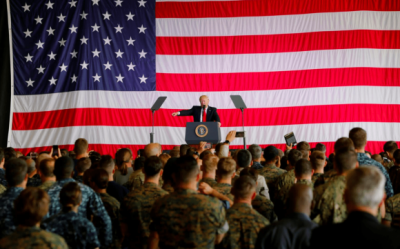 The new National Defense Strategy announced last week moves from the ‘war on terror’ toward conflict with great powers. Michael Whitney, writing about the conflict in Syria, puts it in context:

Washington’s biggest problem is the absence of a coherent policy. While the recently released National Defense Strategy articulated a change in the way the imperial strategy would be implemented, (by jettisoning the ‘war on terror’ pretext to a ‘great power’ confrontation) the changes amount to nothing more than a tweaking of the public relations ‘messaging’. Washington’s global ambitions remain the same albeit with more emphasis on raw military power.

The move from military conflict against non-state actors; i.e., ‘terrorists’, to…