British government-supported firms are engaged in a piratical contest for African natural resources as part of a new colonialist “scramble for Africa,” a major new report claims.

The study argues that a British relaunch of the 19th-century imperialist conquest of Africa is already well underway in an effort to profit from the natural wealth of the vast continent – to the detriment of those who live there.

The tactics also echo those of the original scramble for Africa, with the UK government backing profit-hunting firms to the hilt, War on Want claims.

War on Want suggests the potential profits are huge, with UK firms having collective control of “over £1 trillion [US$1.3 trillion] worth of Africa’s most valuable resources.”

Successive British governments – both Labour and Tory – have backed the firms’ African ambitions at the expense of human rights “through its trade and investment policies, to influence and control British companies’ access to raw materials and the way trade is conducted with Africa,” the study argues. 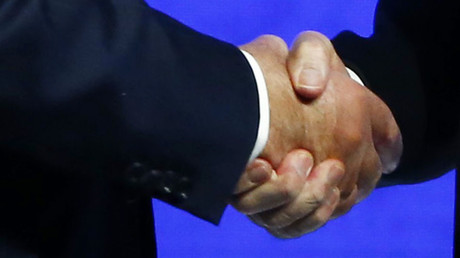 The collaboration is facilitated by a number of means, but critically through what the investigators call a “revolving door between Whitehall and British mining companies, with at least five British government officials taking up seats on the boards of mining companies operating in Africa.”

Alongside detailed breakdowns of the resources under British corporate control, the firms involved and the tax havens in which they are registered, the report lists a number of these so-called ‘revolving door’ figures.

Among them is Baroness Shriti Vadera, a Labour development Minister between 2007 and 2009 before becoming a director of energy firm BHP Billiton. Also mentioned is Lord Kerr of Kinlochard, a UK diplomat for 36 years before a stint as a non-executive director at resource giant Rio Tinto.

The report alleges that some of the firms have been involved in tax dodging, labor rights violation, forced relocations of local communities and, in some cases, killings.

The authors conclude the UK most stop looking at Africa as a low cost supplier of resources and instead help to develop the nations to become manufacturing states themselves.

“These companies should not be allowed to get away with the labour violations, human rights abuses and environmental degradation that is currently taking place,” they add.