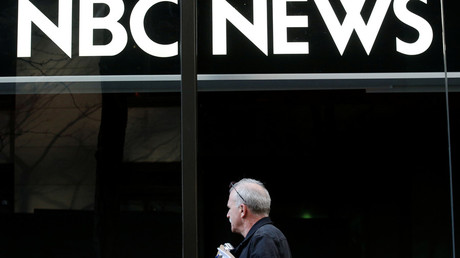 NBC has walked back an explosive story claiming that President Donald Trump’s attorney Michael Cohen had his phones tapped by federal investigators. The high-profile gaffe is the network’s latest adventure in bungled reporting.

NBC issued an on-air correction late Thursday afternoon, citing three unnamed US officials who disputed an earlier claim made by the network that federal investigators had wiretapped Cohen’s phone. The updated story now claims that Cohen’s phone was targeted with a “pen register,” which logs dialed numbers but does not record conversations.

Trump broadsided his “former home” in a tweet posted on Friday:

“NBC NEWS is wrong again! They cite ‘sources’ which are constantly wrong. Problem is, like so many others, the sources probably don’t exist, they are fabricated, fiction! NBC, my former home with the Apprentice, is now as bad as Fake News CNN. Sad!” he wrote.

NBC NEWS is wrong again! They cite “sources” which are constantly wrong. Problem is, like so many others, the sources probably don’t exist, they are fabricated, fiction! NBC, my former home with the Apprentice, is now as bad as Fake News CNN. Sad!

“Those communications may very well now be on a recording in the possession of the FBI,” Avenatti told the network, adding that the wiretap story has made his client’s case against Trump “exponentially better over the last 24 hours.”

“I think ultimately it will be disclosed that during these wiretaps the FBI learned of means by which Michael Cohen was going to destroy … evidence or documentation.” pic.twitter.com/55vrt30jcQ

Even after the embarrassing mistake was revealed, MSNBC’s Tom Winter tried to reassure viewers that the pen register was still a really big deal.

“It doesn’t change necessarily the legal bar here to get a warrant of this type. It’s still a very serious matter because they would have needed to fill out a significant affidavit,” he said. (MSNBC is part of NBC News, which is owned by NBCUniversal, which in turn is owned by Comcast.) Non-Comcast outlets disputed Winter’s claim, however.

The Hill spoke with a constitutional lawyer, who said that it was far easier to obtain a pen register than a wiretap.

“The Supreme Court has recognized that by dialing a phone number, a person voluntarily shares that information with the phone company, so there is a reduced expectation of privacy,” Josh Blackman, a constitutional law professor at the South Texas College of Law in Houston, told the paper.

“The news could raise the legal stakes for Trump, though the revelation that it was not a wiretap lowers them and represents a damaging mistake by a big player in the news media,” The Hill concluded.

Some commentators seemed hesitant to even believe the network’s correction.

“One thing we know for sure is that NBC screwed up, and there’s no surprise there, obviously,” Fox News host Tucker Carlson said on Thursday. “But that’s pretty much all we can be certain of. If NBC’s first story was wrong, why do we assume the second is right?”

Last month, the network stood by MSNBC host Joy Reid after she falsely claimed that her old blog was hacked and peppered with anti-gay posts. Reid later admitted that there was no evidence that her now-defunct blog was hacked, but insisted in an on-air apology that “I genuinely do not believe I wrote those hateful things because they are completely alien to me.” Reid was not reprimanded by the network for her misleading and unsubstantiated claims.

The network’s dubious wiretap story nicely compliments another major error which sent Russiagaters into short-lived fits of orgasmic joy. In June, NBC tweeted out that during an interview with Megyn Kelly, Russian President Vladimir Putin said he “did not deny” having compromising info (i.e. Steele Dossier) that could be used to blackmail Trump.

Millions of #Resistance fighters were crushed when, soon after, the network issued a deflating correction: Actually, Putin denied that he had dirt on the US president – and called the allegation sheer nonsense.

NBC’s stellar reporting was not overlooked on Twitter, where many found highly entertaining ways to skewer the network.

In the original timeline, Michael Cohen was wiretapped.
Thank you to @JoyAnnReid ‘s hackers for fixing this.

So w/ @nbcnews incorrectly reporting Michael Cohen was wiretapped & them standing behind @JoyAnnReid when she’s clearly lying—I assume @facebook will lower the network on its NONSENSE “trustworthy” ranking (really a scheme to prop up establishment news) https://t.co/4r6ABxLtIk

I listened for about an hour to breathless reporting from @NBCNews via MSNBC radio that Michael Cohen had been wiretapped. Now I learn NBC News screwed up. This was a big mistake. Get the iron rod out.