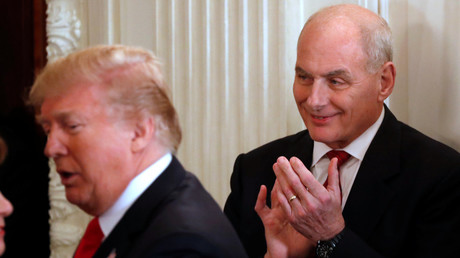 NBC’s story on Monday claimed that Kelly, a former US Marine general, talked about himself as saving the country from Trump and even called the president “an idiot” during discussions on immigration. The story does not cite a single named source, however, relying on a total of eight “current and former White House officials.”

“He doesn’t even understand what DACA is. He’s an idiot,” Kelly said in one meeting, NBC claimed, citing two unnamed officials who said they were present. “We’ve got to save him from himself.”

Building on the NBC News report, CNN says that John Kelly has grown increasingly frustrated with Trump in recent months, even telling senior national security officials last month that he believed the President was becoming “unhinged.”https://t.co/3gVDdqscOI

The story claims that Kelly torpedoed a bipartisan deal on immigrants brought into the US illegally as children, most likely referring to a January proposal by Senators Dick Durbin (D-Illinois) and Lindsey Graham (R-South Carolina).

That seems strange, however, considering that Kelly used to serve in Latin America and has advocated a much softer line on illegal immigrants and the border wall than Trump himself.

Citing unnamed White House aides, the NBC story claimed that Trump has “soured” on his chief of staff. On Monday evening, both the president and Kelly rejected the story entirely.

The Fake News is going crazy making up false stories and using only unnamed sources (who don’t exist). They are totally unhinged, and the great success of this Administration is making them do and say things that even they can’t believe they are saying. Truly bad people!

The White House is running very smoothly despite phony Witch Hunts etc. There is great Energy and unending Stamina, both necessary to get things done. We are accomplishing the unthinkable and setting positive records while doing so! Fake News is going “bonkers!”

“I spend more time with the president than anyone else and we have an incredibly candid and strong relationship,” Kelly said in a statement issued by the White House. “He always knows where I stand and he and I both know this story is total BS.”

NBC’s report “is another pathetic attempt to smear people close to President Trump and distract from the administration’s many successes,” Kelly added.

Zach Fuentes, Kelly’s deputy and a special assistant to Trump, said that Kelly is a Marine general and would never disparage his commander-in-chief like that, or even tolerate someone on the staff doing so.

“I think there are a couple of people here at the White House who would like to see him gone and every time things start to go right, they try to knife him like this,” Fuentes told the Washington Examiner.

Amazing how these “exclusives” always mirror back to liberals the things they want to believe are true. No wonder the media has no credibility. https://t.co/jvF0IW5B3T

Fuentes pointed out the resemblance between NBC’s story about Kelly and the way they covered former Secretary of State Rex Tillerson last October. An NBC report accused Tillerson of calling Trump a “moron” and threatening to quit before being talked out of it by Vice President Mike Pence.

“There are some that try to sow division, to tear people apart. I will not operate that way,” Tillerson told reporters after the story was published.

Trump said the story was “totally refuted” and called it “fake news, totally phony,” demanding NBC issue an apology to America. The network did not retract the story, however, and it kept getting brought up in relation to Tillerson until Trump dismissed the former Exxon executive last month.