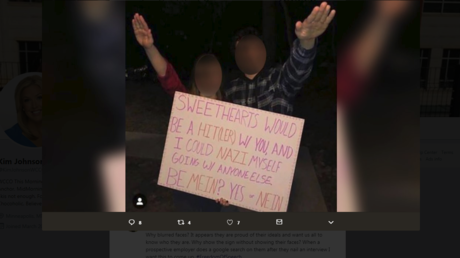 A bizarre social media post urging Minnesota high schoolers to attend a “sweethearts” dance outraged many with its Nazi-themed puns and ‘Heil Hitler’ salutes. The school has condemned the promotion as anti-Semitic.

The photograph, which was shared widely on Facebook, shows two unidentified students from Minnetonka High School giving the Nazi salute while in front of an invitation to a dance that reads: “Sweethearts would be a Hit(ler) w/ you, and I could Nazi myself going w/ anyone else. Be Mein? Yes or Nein?”

The Nazi-inspired plug was reportedly first uploaded to Instagram by the girl who posed in the photo. The caption below the photograph read: “Also I would like to state that I am not anti-Semitic in any way. I hate all races equally.”

After the picture came to the attention of school administrators, the students deleted it, according to Minnetonka Schools Superintendent Dennis Peterson.

In an email to the school community, Peterson condemned the social media post and said that the school district must do more to educate students about Nazi Germany and the Holocaust.

The school’s principal, Jeff Erickson, issued a similar statement which emphasized that the “anti-Semitic media post… in no way aligns with our school’s core values.”

But the school’s swift response was not enough to curtail a tidal wave of social media outrage, not to mention local and national news coverage.

i’m embarrassed to be a part of minnetonka highschool rn.

This was done in Minnetonka. And it breaks my heart. Punishment should happen. Because anti-Semitism is dangerous and never “just a joke” https://t.co/Ivgtc5I31M

I’m an alumni of Minnetonka and my father is a retired principle of Minnetonka High School. I’m so disgusted, ashamed, disappointed, shocked, hurt, angry and more. Hate is not funny.

While Minnesotans took to Twitter to condemn the photograph, national news media such as the Hill and NBC caught wind of the story.


Citing privacy concerns, school officials have not released the names of the students in the photo, or divulged what, if any, disciplinary action has been taken against them.
The incident comes just months after a group of Wisconsin high schoolers were photographed before prom giving what appears to be Nazi salutes. The photograph caused a massive national scandal. Wisconsin school authorities ruled in November that the boys were protected under the First Amendment and would not be punished.