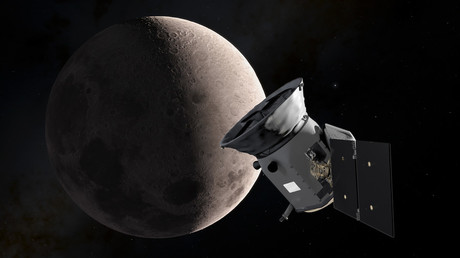 After passing the Moon’s orbit, NASA’s planet-hunting satellite has snapped its first picture from one of the four cameras on board, and relayed the footage of some 200,000 stars back to astronomers on Earth.

The mesmerizing two-second test exposure by the Transiting Exoplanet Survey Satellite (TESS) focused on the southern constellation Centaurus, after the spacecraft passed about 5,000 miles from the Moon. The image which depicts more than 200,000 stars clearly shows Coalsack Nebula is in the right upper corner, while Beta Centauri is seen at the lower left edge.

TESS, that was launched on its hunt for faraway planets last month, is armed with four cameras capable of covering 400 times as much sky as shown in its maiden snapshot.

It is NASA’s first cosmic surveyor tasked with searching for Earth-like planets outside of our own solar system. The mission for exoplanets is expected to last at least two years and will start in mid-June after TESS finishes its instrument testing.