For the first time ever, astronomers have documented the process by which radiation is expelled from black holes – a process that many believe holds the key to how galaxies are formed – using NASA’s Wide-field Infrared Survey Explorer (WISE) telescope.

Supermassive black holes – concentrations of mass the size of hundreds of thousands or even millions of suns, with gravity so powerful even light cannot escape – exist in the centers of most galaxies.

When an object is absorbed by a black hole, not all of the contents are consumed – instead it emits a vast “belch” of intense radiation, a blinding bright whip of energy known as a tidal disruption flare, which wipes out everything in its path. 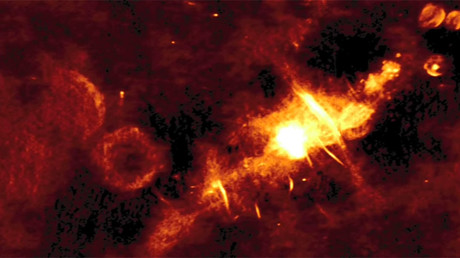 Flares are poorly understood, but astronomers have theorized that further away from the black hole there is cosmic dust that is close enough to take in some of the radiation projected from the black hole, but not so close that it is incinerated by the flare.

In theory, the radiation in the dust should provide an “echo” – an imprint that shows the strength of the flare, and tells observers more about the black hole and its appetites.

But two recently published studies, one from Johns Hopkins University in Baltimore and another from the University of Science and Technology of China, may eventually help turn this theory into proven observation.

Using images from the WISE telescope, launched in 2009, which can measure the infrared emissions of cosmic dust, the US scientists have found at least three black holes surrounded by the radiation-charged cosmic dust, and the Chinese have found another one.

“This is the first time we have clearly seen the infrared light echoes from multiple tidal disruption events,” said Sjoert van Velzen, the lead author of the US study.

As well as the echoes, the scientists have also found the dead zone directly around the supermassive black holes themselves.

Making sense of flares is important, as scientists believe that the belches create new stars, and form the shape of the galaxy – and that this was a prevalent phenomenon when the universe was first formed nearly 14 billion years ago.

Now that the echo can be mapped and its distance estimated, the exact mechanics of the process should become clearer.

“Our study confirms that the dust is there, and that we can use it to determine how much energy was generated in the destruction of the star,” explained Varoujan Gorjian, an astronomer at NASA’s Jet Propulsion Laboratory, Pasadena, California.