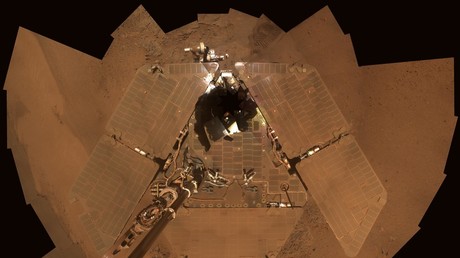 NASA confirmed that Opportunity’s subsystems had been knocked off as the Martian storm, which is enveloping the Red Planet and blocking out the sun, continues to intensify. Solar power is essential for the rover to operate.

While the rover has proved more resilient than expected by lasting nearly 15 years despite being only designed for a 90-day mission, the end could now be nigh for the durable device.

As it stands, the rover’s mission clock which is programmed to wake the computer so it can check power levels, is the only function still operational.

The Martian dust storm blotting out the sun above Opportunity has continued to intensify. It blankets a quarter of the planet. All rover subsystems are off, except a mission clock, programmed to wake the computer to check power levels. Full status report: https://t.co/VwuuPwEpPApic.twitter.com/rQvHDsxuQj

Mission engineers are doubtful that the rover has enough sunlight to charge back up for at least the next several days. NASA says if the spacecraft’s computer determines that its batteries don’t have enough charge, it will again put itself back to sleep.

The massive dust storm, first detected on May 30, now blankets a quarter of the planet –  some 14 million square miles (35 million sq km) of Martian surface.

This is not Opportunity’s first time to hunker down during a dust storm, however. In 2007 a huge storm covered the planet, leading to two weeks of minimal operations, including several days with no contact from the rover in an effort to conserve its power. Ultimately, the storm subsided and Opportunity prevailed.

Another glimmer of hope comes from the reawakening of a long lost NASA spacecraft earlier this year. In February scientists were stunned to detected a new signal from the satellite ‘IMAGE’ some 13 years after the spacecraft was declared lost.