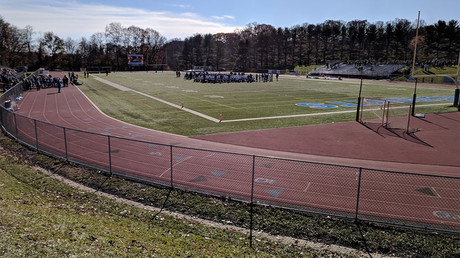 When a New Jersey school installed CCTV to find the person responsible for the human feces found daily on its playing fields, staff couldn’t have expected the footage to reveal the school superintendent as the secret defecator.

But that’s exactly what happened after Thomas Tramaglini, 42, was spotted dropping a deuce on the football field and track at Holmdel High School in the Kenilworth School District in the early hours of Monday morning. Tramaglini, who following his arrest was given a paid leave of absence from his $147,000 a year job, has been superintendent of the district since 2015, according to NJ.com.

School officials set up the surveillance system after receiving complaints from coaches about the daily appearance of human feces on the playing fields. Tramaglini, who was pictured running in the area before the incident, has been charged with lewdness, public defecation and dumping of litter.

“Earlier today, we learned of municipal court charges facing our current superintendent of schools in Holmdel, NJ,” Kenilworth Public Schools said in a statement published to Facebook. “Given the nature of those charges, he asked for and was granted a paid leave of absence.”