Built to endure a nuclear attack, a New York City skyscraper known as the AT&T Long Lines Building is actually among the most essential assets of the NSA, which runs mass surveillance programs inside the windowless tower, according to the Intercept.

The brutalist structure located at 33 Thomas Street in Lower Manhattan is made up of 29 floors and three underground levels. Built between 1969 and 1974 by John Carl Warnecke & Associates, it was simply referred to as Project X during the planning phase, the Intercept reports.

The 550-foot high-rise was purportedly designed to house enough food and supplies to sustain a “self-contained city” of 1,500 people for two weeks in case a worst-case Cold War scenario involving atomic weaponry arose.

Aside from accommodating “powerful computers, cables, and switchboards” and handling long-distance phone calls, including international ones, the AT&T telecommunications center doubles as a wiretapping facility that targets calls, faxes, and internet traffic, according to the Intercept.

The Long Lines Building is still shown as being owned by AT&T by New York’s Department of Finance, the Intercept found.

The NSA refers to the skyscraper as TITANPOINTE, according to documents leaked by whistleblower Edward Snowden and interviews that the Intercept conducted with ex-AT&T employees. A key NSA program called BLARNEY is allegedly run out of a secret location in the building that taps into “communications of the United Nations, the International Monetary Fund, the World Bank, and at least 38 countries, including close US allies such as Germany, Japan, and France,” their report states.

BLARNEY documents detail how the program does “full take” surveillance, meaning it gathers both content and metadata in bulk by using “commercial partnerships” to “gain access and exploit foreign intelligence obtained from global networks.” The data collection falls into six different categories: “counterproliferation, counterterrorism, diplomatic, economic, military, and political,” according to The Intercept.

The former president of the UN’s general assembly, Mogens Lykketoft, told the Intercept, “Such spying activities are totally unacceptable breaches of trust in international cooperation.” 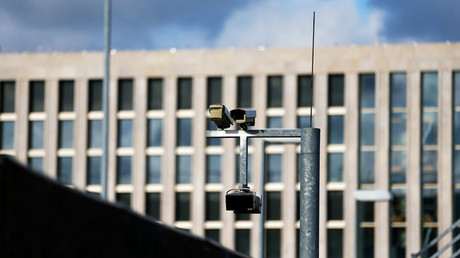 Among the leaked NSA documents are two guides, one from April 2011 on the BLARNEY program and another from February 2013. The former reveals that TITANPOINTE exists in New York City, and the latter refers to a “partner” named LITHIUM, which is what the NSA calls AT&T. The 2011 document also points employees to the FBI’s New York field office, which is just a block from the AT&T Long Lines Building.

Both AT&T and the FBI coordinated NSA agent visits to the facility, the Intercept reported. Further evidence from the NSA documenting that TITANPOINTE is, in fact, the 33 Thomas Street building includes instructions for visitors to buzz in, sign in, and meet an escort. The Intercept found a buzzer outside the building, a sign-in sheet at the lobby desk, and a round-the-clock guard. There are also AWM parking spaces, reserved for federal agents, in front of the building.

Former AT&T engineer Thomas Saunders told the Intercept that there are at least three “4ESS switches” for routing phone calls across various networks inside the building.

“Of the first two, one handled domestic long-distance traffic and the other was an international gateway,” Saunders said. That aligned with NSA documents that describe TITANPOINTE as having “foreign gateway switches” with “RIMROCK access.” RIMROCK is NSA code for 4ESS switches, the Intercept reported.

An AT&T spokesperson denied that government agencies have direct access to their networks, however.

“Rather, we simply respond to government requests for information pursuant to court orders or other mandatory process and, in rare cases, on a legal and voluntary basis when a person’s life is in danger and time is of the essence, like in a kidnapping situation,” Fletcher Cook told The Intercept.

Apart from AT&T, some 80 corporations have “strategic partnerships” with the NSA, the report states.