Some 300 bodies discovered in an ancient mass grave in England may belong to Vikings from the ‘Great Heathen Army’ of the 9th century, new research suggests.

A team of archaeologists from the University of Bristol believe that the remains, initially discovered in the ‘80s, are those of warriors sent to England to fight the King of Mercia, driving him into exile in the year 873 AD. A number of artifacts including weapons and silver coins were also believed to be from the time.

Initial radiocarbon dating of the remains, discovered in Derbyshire, England, revealed that they were too old to be of Viking origin, shrouding the site in mystery until this recent revelation. 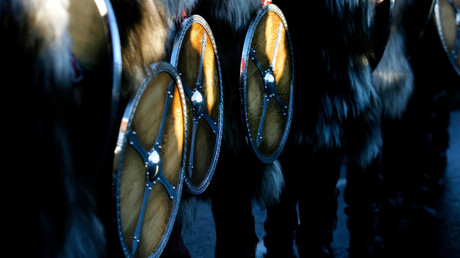 “The previous radiocarbon dates from this site were all affected by something called marine reservoir effects, which is what made them seem too old,” study lead author Cat Jarman explained in a university news release. Essentially, this means that if a person ate a lot of fish while alive, his remains will appear more ancient.

“When we eat fish or other marine foods, we incorporate carbon into our bones that is much older than in terrestrial foods. This confuses radiocarbon dates from archaeological bone material and we need to correct for it by estimating how much seafood each individual ate,” she added.

Most of the dead, about 80 percent, were men aged between 18 and 45. Several showed signs of violent injury consistent with war wounds. A separate double grave from the site was also dated from the the time.

An older male was buried with a Thor’s hammer pendant and a Viking sword among other artefacts. This warrior had, according to the researchers, “received numerous fatal injuries around the time of death, including a large cut to his left femur.”

Furthermore, a boar’s tusk had been placed between the warriors legs, indicating that he may have received an injury that severed his penis, and the boar’s tusk, a replacement to be used in the afterlife.

Not all of the remains belonged to men, about 20 percent were female. Four juveniles were also buried, albeit in a separate grave. The children, aged between 8 and 18, were buried together with a sheep jaw at their feet.

At least two of them had suffered traumatic injuries, leading researchers to posit that “this may have been a ritual grave, paralleling accounts of sacrificial killings to accompany Viking dead from historical accounts elsewhere in the Viking world.”

The teams research was published Friday in the journal Antiquity.