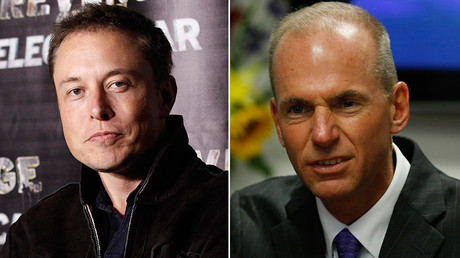 Boeing CEO Dennis Muilenburg has promised to beat SpaceX in the race to Mars, prompting a threatening, but concise, response from his counterpart, Elon Musk.

Muilenburg made the bold claim – that he believed the first people to set foot on Mars will do so from a Boeing rocket – during an interview on CNBC Thursday.

When asked whether he or Musk will get there first, Muilenberg responded: “Eventually we’re going to go to Mars and I firmly believe the first person that sets foot on Mars will get there on a Boeing rocket,” he said.

Musk responded to the claim via Twitter simply writing: “Do it.”

The race for Mars has many players, including NASA and Blue Origin to name a few, however Musk has maintained that he intends to reach his goal before anyone else, boldly promising to begin his Red Planet mission by the year 2022.

Muilenburg says Boeing intends on taking their next generation rocket, called ‘Space Launch System’ with NASA for its first test flight in 2019.

“This is a rocket that’s about 36 stories tall, we’re in the final assembly right now, down near New Orleans. And we’re going to take a first test flight in 2019 and we’re going to do a slingshot mission around the moon,” Muilenburg said to Bloomberg.

If we’re going by the pair’s current projections, Musk could ambitiously get boots on Mars some 10 years before Muilenberg. Musk said he intends on building a city on the planet because he “can’t think of anything more exciting than going out there and being among the stars.”