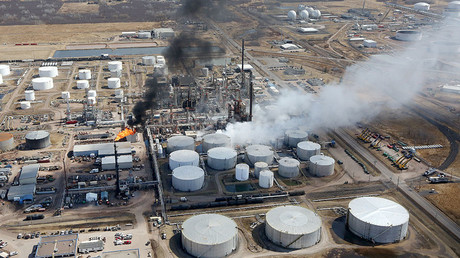 Two explosions and fire at a large oil refinery in Superior, Wisconsin, have resulted in at least ten casualties, according to the local fire department. Initial reports spoke of as many as 20 injured, but no fatalities.

“There is a report of multiple casualties. Initial reports are at least 20 casualties transported. Multiple agencies have responded,’’ Superior Fire Chief Steve Panger said in a statement.

Ten people were admitted to hospitals in Duluth, Minnesota, a spokeswoman for Essentia Health-St. Mary’s Medical Center told Reuters. One person was seriously injured, she said. There are no known fatalities.

Reports of an explosion and fire at the Husky Energy refinery emerged just after 10am on Thursday. Another explosion was heard around noon local time.

Plumes of black smoke could be seen emitting from the Stinson Avenue location. Witnesses reported feeling the shaking of an explosion, and soon after employees were evacuated and emergency services were on the scene.

Bob King, a photographer for the Duluth News Tribune who flew over the plant in an airplane, said one of the storage tanks at the facility was broken and a thick black liquid was pouring out.

A contractor working inside the building at the time of the blast said the explosion sounded like a “sonic boom” and that it happened when crews were shutting down the plant for repairs. Panger said the explosion came from a small tank holding either crude oil or asphalt and that the fire has since been extinguished.

Superior Police issued a warning to residents to stay away from the area, although there is “no immediate/ongoing or expected further threat to refinery employees or the community at this time.”

Large incident in the area of Stinson and Hill. Do not enter this area. If evacuation is in order, we will let you know.

The school district of Superior told parents on Facebook that all fires have been extinguished and there is no “reason for concern or to evacuate.”

“We have been made aware of a fire at Husky (Calumet refinery). We have been advised by the police department that there is no reason for concern or to evacuate”, read the statement. “We received word that the School District can go about it’s regular school day. All fires are out.”

Wisconsin’s sole oil refinery employs about 180 people and provides Northland with gasoline, asphalt and other specialty petroleum products. About 50,000 barrels of oil are processed at the refinery every day.