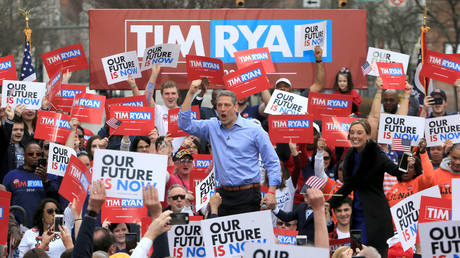 There was no collusion but, for the crowded field of candidates hoping to be nominated by Democrats as their runner for 2020, Russia is still a good target to blame or to threaten with. Will using such rhetoric actually help them?

Special Counsel Robert Mueller’s probe ended last month and its conclusions didn’t make Russiagaters happy, but some seem to be not quite ready to give up on the ‘Russians are coming!’ line.

Russians come to OUR social media – and divide America!

While launching his campaign in Ohio, Democrat representative Tim Ryan talked freely about the growing division in US society, which prevents the country from fixing a whole set of “broken systems.” But who’s to blame? The dreaded “enemies” coming onto social media to set Americans against one another – those pesky Russians.

“If there is an incident in America that’s controversial – about kneeling for the National Anthem or there’s a school shooting or there’s an incident between a cop and a kid – you know who comes on to our social media?” Ryan told his supporters.

The Russians. OK? I want you to hear this. The Russians. They come into our social media and they spin things to get us into these divided camps so that we’re fighting with each other.

Sure, if you fend off the elusive Russian trolls, all the issues will just go away, because there will be no one to sow division. What a solid concept to campaign on.

Another Democratic presidential hopeful, Mayor Pete Buttigieg of South Bend, Indiana, has offered a take on the most important thing the US has – its ‘democracy.’ This treasured possession is so important that it might actually be threatened by another cornerstone of the US, capitalism, Buttigieg said on NBC’s Meet the Press.

“When capitalism comes into tension with democracy, which is more important?” he wondered.

I believe democracy is more important. When you have capitalism capturing democracy, where you have the kind of regulatory capture where powerful corporations can arrange the rules for their benefit, that’s not real capitalism.

And where’s that happening? Well, not in the US, with is military industrial complex and big pharma so close to Washington, but in Russia.

It might work with the die-hard Russiagaters, who, for the past two weeks, have been bemoaning the end of the Mueller probe, but polls are showing that people would like the candidates to talk instead about the real issues and problems.

To win in 2020, Dems need to keep the focus on what matters most to the voters (hint: it’s not Russia). Trump wants a fight on Obamacare? Bring it. New @ppppolls show voters say health care is a more important issue vs Russia 80% to 8%. pic.twitter.com/DCYoyo8aiK