President Donald Trump has lashed out at Special Counsel Robert Mueller’s ‘Russiagate’ investigation. This time, instead of declaring the investigation a ‘hoax’ or ‘witch hunt,’ he called it unconstitutional.

“The appointment of the Special Counsel is totally UNCONSTITUTIONAL! Despite that, we play the game because I, unlike the Democrats, have done nothing wrong!” the president tweeted on Monday.

The appointment of the Special Counsel is totally UNCONSTITUTIONAL! Despite that, we play the game because I, unlike the Democrats, have done nothing wrong!

Trump was active on Twitter on Monday morning, and tweeted earlier that he had the absolute authority to pardon himself if Mueller were to find him guilty of any crimes. He claimed, however, that he would never do so, as he believes that he has “done nothing wrong.”

As has been stated by numerous legal scholars, I have the absolute right to PARDON myself, but why would I do that when I have done nothing wrong? In the meantime, the never ending Witch Hunt, led by 13 very Angry and Conflicted Democrats (& others) continues into the mid-terms!

Trump’s Monday morning Twitter salvo comes hot on the heels of the publication of a 20-page document sent to Special Counsel Mueller from Trump’s legal team earlier this year. The document outlines the president’s legal strategy and argues that Trump cannot be indicted, subpoenaed or found guilty of obstruction of justice because he is the nation’s “chief law enforcement officer.” The document also argues that Trump “could, if he wished, terminate the inquiry, or even exercise his power to pardon if he so desired.”

Rudy Giuliani, Trump’s personal attorney, said on Sunday that Trump could shoot former FBI director James Comey and not be indicted unless he was impeached first.

“If he shot James Comey, he’d be impeached the next day,” Giuliani was quoted by HuffPost as saying. “Impeach him, and then you can do whatever you want to do to him.” 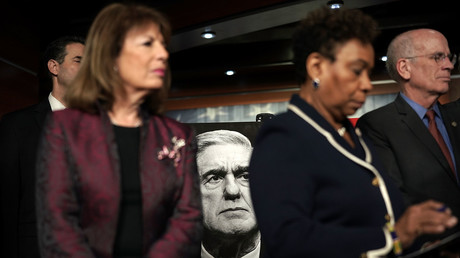 Mueller’s ‘Russiagate’ probe has now been ongoing for more than a year, and has cost the US taxpayer almost $17 million. Its focus has shifted away from looking for evidence of Russian collusion and towards finding evidence of obstruction by Trump’s team.

US District Judge Amy Berman Jackson dismissed the challenge, and ruled that Mueller was operating within the scope of the law.

Mueller’s investigation has thus far failed to find any evidence of collusion or obstruction, but Trump will likely have to “play the game,” for the rest of the summer. Giuliani told the New York Times that Mueller’s office intends to wrap up the investigation by the beginning of September, to avoid unfairly influencing Republican chances in November’s midterm elections.

“You don’t want another repeat of the 2016 election where you get contrary reports at the end and you don’t know how it affected the election,” Giuliani told the paper, citing then-FBI chief James Comey’s decision to reopen the Hillary Clinton email investigation days before the polls opened in the 2016 US presidential election.