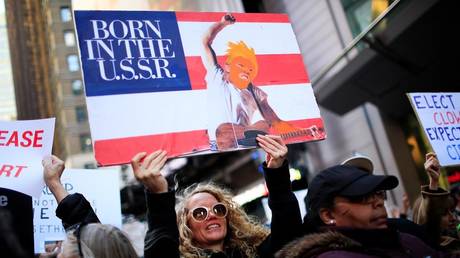 Special counsel Robert Mueller’s ‘Russiagate’ report has cleared Donald Trump of ‘collusion’ charges but maintains that Russia meddled in the 2016 US presidential election. Yet concrete evidence of that is nowhere to be seen.

The report by Mueller and his team, made public on Thursday by the US Department of Justice, exonerates not just Trump but all Americans of any “collusion” with Russia, “obliterating” the Russiagate conspiracy theory, as journalist Glenn Greenwald put it.

However, it asserts that Russian “interference” in the election did happen, and says it consisted of a campaign on social media as well as Russian military intelligence (repeatedly referred to by its old, Soviet-era name, GRU) “hacking” the Democratic Congressional Campaign Committee (DCCC), the DNC, and the private email account of Hillary Clinton’s campaign chair, John Podesta.


As evidence of this, the report basically offers nothing but Mueller’s indictment of “GRU agents,” delivered on the eve of the Helsinki Summit between Trump and Russian President Vladimir Putin in what was surely a cosmic coincidence.

Indictments are not evidence, however, but allegations. Any time it looks like the report might be bringing up proof, it ends up being redacted, ostensibly to protect sources and methods, and out of concern it might cause “harm to an ongoing matter.”

Mueller’s report leads with the claim that the Internet Research Agency (IRA) ran an “active measures” campaign of social media influence. Citing Facebook and Twitter estimates, the report says this consisted of 470 Facebook accounts that made 80,000 posts that may have been seen by up to 126 million people, between January 2015 and August 2017 (almost a year after the election), and 3,814 Twitter accounts that “may have been” in contact with about 1.4 million people.

Those numbers may seem substantial but, as investigative journalist Gareth Porter pointed out in November 2018, they should be regarded against the background of 33 trillion Facebook posts made during the same period.

According to Mueller, the IRA mind-controlled the American electorate by spending “approximately $100,000” on Facebook ads, hiring someone to walk around New York City “dressed up as Santa Claus with a Trump mask,” and getting Trump campaign affiliates to promote “dozens of tweets, posts, and other political content created by the IRA.” Dozens!

Meanwhile, the key evidence against IRA’s alleged boss Evgeny Prigozhin is that he “appeared together in public photographs” with Putin.

The report claims that the GRU hacked their way into 29 DCCC computers and another 30 DNC computers, and downloaded data using software called “X-Tunnel.” It is unclear how Mueller’s investigators claim to know this, as the report makes no mention of them or FBI actually examining DNC or DCCC computers. Presumably they took the word of CrowdStrike, the Democrats’ private contractor, for it.


However obtained, the documents were published first through DCLeaks and Guccifer 2.0 – which the report claims are “fictitious online personas” created by the GRU – and later through WikiLeaks. What is Mueller’s proof that these two entities were “GRU” cutouts? In a word, this:

That the Guccifer 2.0 persona provided reporters access to a restricted portion of the DCLeaks website tends to indicate that both personas were operated by the same or a closely-related group of people.(p. 43)

However, the report acknowledges that the “first known contact” between Guccifer 2.0 and WikiLeaks was on September 15, 2016 – months after the DNC and DCCC documents were published! Here we do get actual evidence: direct messages on Twitter obtained by investigators. Behold, these “spies” are so good, they don’t even talk – and when they do, they use unsecured channels!


Mueller notably claims “it is clear that the stolen DNC and Podesta documents were transferred from the GRU to WikiLeaks” (the rest of that sentence is redacted), but the report clearly implies the investigators do not actually know how. On page 47, the report says Mueller “cannot rule out that stolen documents were transferred to WikiLeaks through intermediaries who visited during the summer of 2016.”

Strangely, the report accuses WikiLeaks co-founder Julian Assange of making “public statements apparently designed to obscure the source” of the materials (p.48), notably the offer of a reward for finding the murderer of DNC staffer Seth Rich – even though this can be read as corroborating the intermediaries theory, and Assange never actually said Rich was his source.

Also on rt.com
Mueller was supposed to be the Democrats’ savior, but now they’re out for blood


The rest of Mueller’s report goes on to discuss the Trump campaign’s contacts with anyone even remotely Russian and to create torturous constructions that the president had “obstructed” justice by basically defending himself from charges of being a Russian agent – neither of which resulted in any indictments, however. But the central premise that the 22-month investigation, breathless media coverage, and the 448-page report are based on – that Russia somehow meddled in the 2016 election – remains unproven.