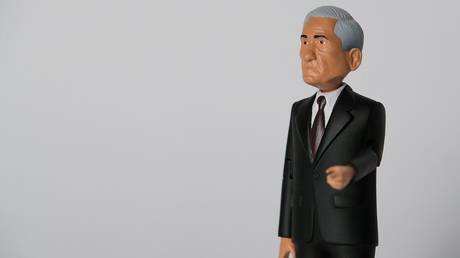 In an apparent bid to shield his case against alleged Russian trolls from legal challenge, special counsel Robert Mueller claimed some evidence previously provided was hacked and published to discredit his probe.

On Wednesday, Mueller filed a motion to oppose discovery in case against Concord Management and Consulting LLC, which he indicted last February on charges of running the Internet Research Agency, also known as the “St. Petersburg troll factory.”

“Sensitive” evidence in the case cannot be turned over to Concord’s lawyers, because that would make it accessible to their clients in Russia – and back in October, Mueller claimed, someone claimed to have hacked Concord’s computers and posted evidence previously handed over online “as part of a disinformation campaign aimed (apparently) at discrediting ongoing investigations into Russian interference in the US political system.”

It was that claim that got the attention of the media and the ‘Russiagate’ crowd.

A pro-Russian Twitter account used information from a criminal case that special counsel Robert Mueller’s team brought against a Russian social media company as part of a disinformation campaign, according to a new filing from the US Justice Department https://t.co/FUd9uCvO5y

What Mueller actually alleges is less headline-worthy and far more tenuous. Namely, on October 22 last year, a Twitter account @HackingRedstone claimed to have gained “access to the Special Counsel Mueller’s probe database as we hacked Russian server with info from the Russian troll case Concord LLC v. Mueller,” offering “all the files Mueller had about the IRA and Russian collusion.”

According to a footnote in the filing, Mueller’s team was informed of this by an unnamed reporter. However, the Twitter account referenced comes up as suspended, and aside from that notice there are no entries for it in the Internet Archive, making Mueller’s claim impossible to independently verify.


The webpage allegedly linked in the tweet is said to have contained “file folders with names and folder structures that are unique to the names and structures of materials… produced by the government in discovery.”

Of the 300,000 files on the site, “over 1,000” matched the hashtag values of documents provided by Mueller to Concord, the filing said. Mueller argued these must have been obtained from Concord, because the FBI “found no evidence” that US government servers fell victim to any hack involving the files. Somewhat confusingly, the filing argued that many other file names used a reference to the Relativity database, which the US government “has not used” to store materials related to this case.

Concord’s lawyers have informed the court that the company’s computers have not been hacked, but Mueller’s filing accused them of lying, saying that the webpage contained “actual discovery materials from this case.”


Because the webpage – which the FBI says was registered to an IP address in Russia – also contained “numerous irrelevant files,” whoever created the page wanted to make it appear as if the dump was the sum total of Mueller’s evidence on “Russian collusion,” and therefore amounted to “an apparent effort to discredit the investigation,” according to the filing.

To wit, Mueller is making an assertion based on a tweet and a webpage – that currently do not exist – to argue that it should not disclose further “sensitive” evidence to defendants in a Russiagate case.

The original indictment of Concord was seen as a major coup for Mueller – the first charges against actual Russians in his open-ended probe of the 2016 US election at that point – but it quickly turned into a headache, when the company’s US lawyers chose to contest the charges and file motions for discovery.

While the indictment against the Internet Research Agency is one of the few results of Mueller’s probe that actually involve Russia, the court prospects of the case were in doubt from the start. All the individuals accused under it are Russian citizens, and Russian Constitution does not allow extradition of its nationals, which means getting the suspects to actually stand trial would be difficult.