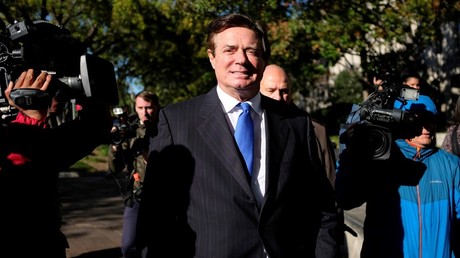 Special counsel Robert Mueller has accused former Trump campaign chair Paul Manafort of making false statements in the “Russiagate” investigation, including about a man Mueller insinuated might be a Russian spy.

In a heavily redacted court filing on Friday, Mueller’s prosecutors argue that Manafort breached his plea agreement by making false statements, which were “not instances of mere memory lapses.”

One of the issues Manafort allegedly lied about were his contacts with Konstantin Kilimnik, a Russian-Ukrainian citizen living in Kiev. In June, Mueller named Kilimnik as a co-conspirator in Manafort’s alleged attempts to tamper with two unnamed witnesses in the probe. Those charges of witness tampering led to a judge ordering Manafort be held in jail.


Another area is only referred to as “information pertinent to another Department of Justice investigation.” Manafort also, allegedly, stayed in contact with the White House during the investigation, with his attorneys apparently briefing the lawyers for President Donald Trump.

While that is apparently not illegal, Mueller’s prosecutors now argue that Manafort denying he was contacting anyone in the Trump administration is enough of a false statement to render his plea deal void.

The White House shrugged off the Manafort memorandum, with press secretary Sarah Huckabee Sanders releasing a statement on Friday evening saying it showed “absolutely nothing about the president.”

It says even less about collusion and is devoted almost entirely to lobbying-related issues. Once again the media is trying to create a story where there isn’t one.

None of the charges leveled against Manafort are related to his duties as Trump’s campaign manager, between March and August 2016, focusing instead on Manafort’s work as a lobbyist for the government of Ukraine that was overthrown in 2014 and alleged plots to avoid paying taxes on his income from that work.

One of the reasons the media have glommed onto any mention of Kilimnik is that he was previously described as a person that the FBI agents assisting Mueller “assess[ed] has ties to Russian intelligence services.”

This assessment is apparently based on Kilimnik’s studies at a Soviet foreign language institute in the 1980s. However, Kilimnik denied any connections to intelligence agencies in a 2017 interview with the US government-run outlet Radio Free Europe/Radio Liberty. He also revealed that before getting involved with Manafort in 2005, he worked for the International Republican Institute, a US-funded “democracy promotion” outfit chaired by the late Senator John McCain.