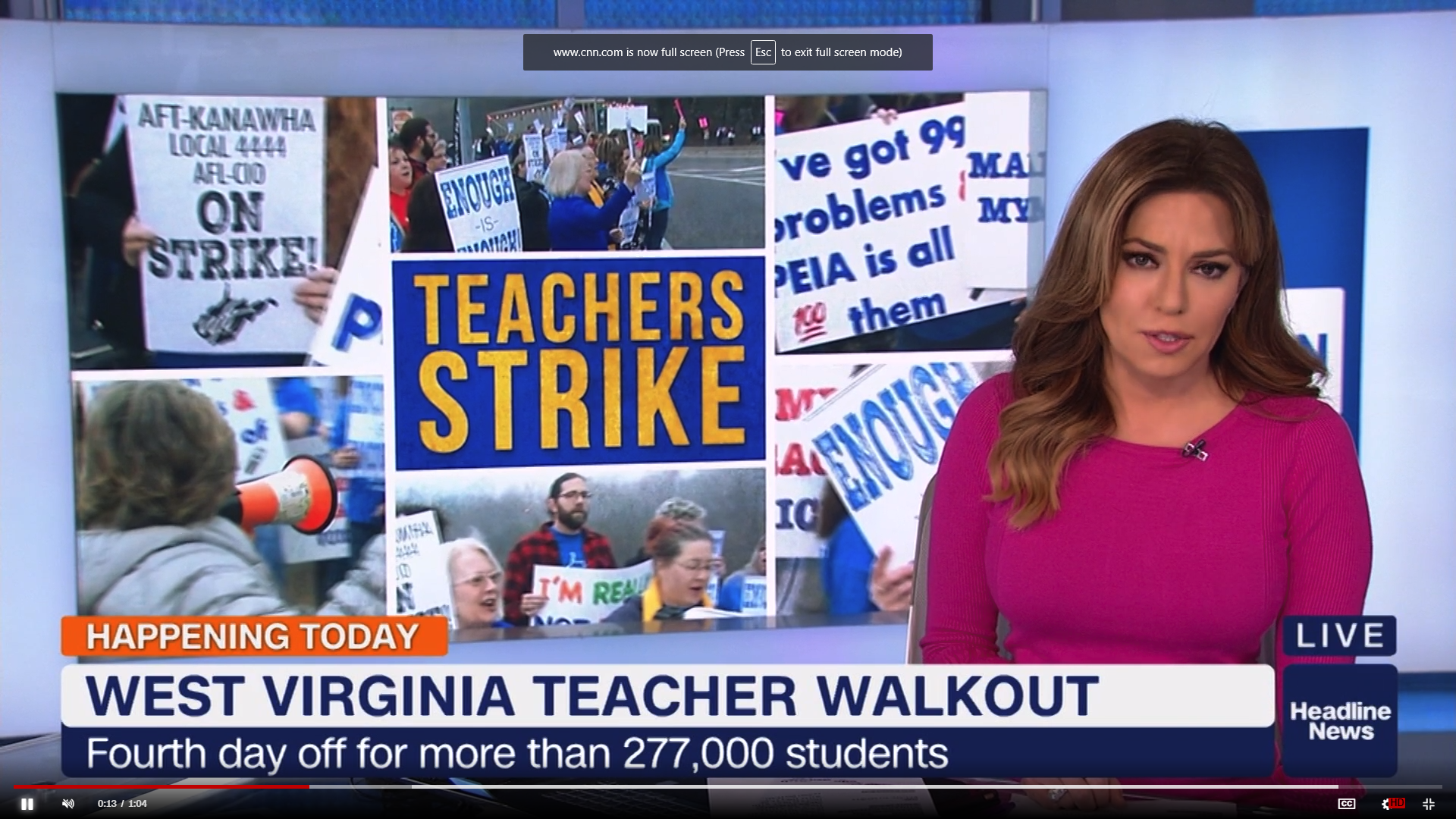 The West Virginia teachers strike was covered on CNN Headline News, but barely mentioned on MSNBC.

Eight days into the first wildcat strike by West Virginia teachers in 27 years—organized by rank-and-file union members in all 55 West Virginia counties—America’s largest liberal cable network, MSNBC, is a virtual no-show in reporting on the momentous labor unrest.

Save for one two-minute throwaway report from daytime show Velshi and Ruhle (2/27/18), MSNBC hasn’t dedicated a single segment to the strike—despite the strike’s unprecedented size and scope, which garnered major coverage from major outlets like CNN (3/1/18), the New York Times (3/1/18), Washington Post (3/2/18), Vox (2/24/18) and dozens of others.

The most glaring omission is from the three highly paid primetime hosts: Rachel Maddow, Lawrence O’Donnell and former In These Times and Nation writer Chris Hayes. None of the three big hosts have tweeted about it, much less mentioned the subject on air.

The more than 30,000-strong work action, in protest of low pay and soaring healthcare costs, is being ignored as the right wing escalates the campaign to gut public-sector unions, with oral arguments in the Janus Supreme Court case opening just days after the strike began. West Virginia’s rank-and-file teachers and school employees, on the front lines of efforts to stem this attack, are now continuing their work stoppage in defiance of a tentative agreement announced Tuesday night by Republican Gov. Jim Justice and union leadership. This wildcat strike, organized outside of the official channels of top union leadership, is being waged in a “right to work” state as attacks on teachers’ unions escalate.

Another major topic that’s non grata at the Comcast-owned cable network is recent efforts by senators Bernie Sanders, Chris Murphy and Mike Lee to end US backing for the brutal, human rights-abusing war on Yemen. Wednesday, the independent, Democrat and Republican introduced a bill to cut off financial and logistical support for Saudi Arabia’s bombing and blockade of Yemen, which has left over 15,000 dead and created more than a million cases of cholera.

As FAIR has noted before, the US-created humanitarian crisis is a total non-issue to MSNBC. During the Obama years, it was ignored entirely (FAIR.org, 10/14/16), and MSNBC hasn’t done much better under Trump’s tenure—reporting on Russia-related stories 5,000 percent more often than on the largest man-made famine on Earth (FAIR.org, 1/8/18).

If congressional Democrats or DoJ officials fed a story to CNN or the Daily Beast, detailing how West Virginia teachers shared a handful of Russian memes in the run-up to the strike, or claiming that a Saudi bombing victim moonlighted as a Kremlin-paid troll, MSNBC would likely have given the stories six segments apiece. Not that the Mueller probe or the larger Russia investigation aren’t newsworthy—they are objectively important—but the nonstop firehose of Russia coverage, as FAIR has shown before, is crowding out other issues important to activists and progressives.

Perhaps this evening, one of the three multi-millionaire hosts can carve out 5 minutes for a story that doesn’t involve the graphics department mocking up a blood-red St. Basil’s Cathedral and a backwards “R.” Perhaps they can take time out to interview a striking teacher or union representative, or any of the thousands of people involved in this major act of actual, real-life resistance.