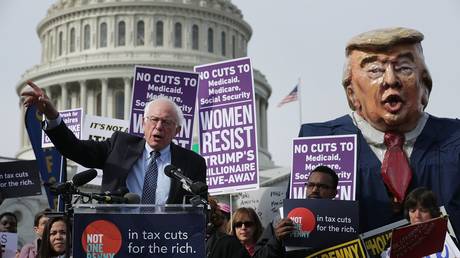 Corporate media criticism of democratic socialist Bernie Sanders is to be expected, but RT’s Lee Camp was taken aback by MSNBC’s suggestion that the senator should embrace capitalism because… his father fled the Nazis.

The news network assembled one of its panels to dissect a speech that the popular presidential candidate gave about his people-over-profits platform – and the resulting commentary was far too predictable. Political analyst Rick Tyler argued that the big “lesson” Sanders should have learned, considering his Polish father was a refugee who escaped Nazi occupation, is that “a prosperous capitalist society works for people.”


To which Camp replied: “Really? I would think the takeaway would have been, ‘Nazis f***ing suck!’”

He also noted that Sanders was being scolded essentially for choosing healthcare-for-all over “unfettered capitalism” – a policy stance that clearly doesn’t sit well with MSNBC’s corporate ownership.