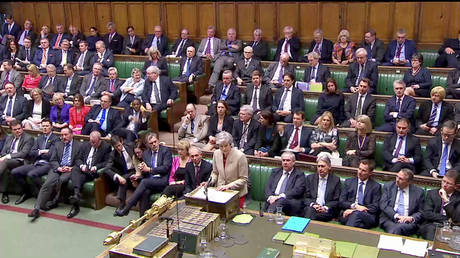 British MPs have rejected Theresa May’s Brexit withdrawal agreement despite its separation from the rest of the deal. It’s the third humiliating defeat for the prime minister on what was supposed to be the day Britain left the EU.

The MPs voted down the agreement 344-286 – with a margin of 58 votes. May apparently failed to convince enough Conservative rebels, and the DUP said it would not vote for her deal, be it the full text or only the withdrawal part.

Following the vote, Labour’s Jeremy Corbyn and the SNP’s Ian Blackford called on May to accept the will of parliament and to resign. Both called for a general election to be held.

Unlike the previous two times the agreement was rejected, May on Friday asked MPs to approve only the withdrawal part of the deal, and not the political declaration.

This was supposed to eliminate the most contested part of the text and leave the stripped-down deal the majority of MPs could in theory sign up to. But Labour has said it could not back just one part of the agreement because without the political declaration MPs could not be sure what they were actually voting for.

May, who has already promised to quit before Brexit Phase 2 to try and change the minds of Conservative rebels, had been forced to vote on something because the EU had told London that it would only agree to a further delay to Brexit until May 22nd if the prime minister was able to get an agreement through parliament by March 29th.


If nothing changes now before April 12th, Britain will have to either agree to stand candidates in European Parliament elections in May and push for a much longer extension, or face crashing out of the EU in a hard no-deal Brexit.

Some Brexiteers fear that ultimately Britain is facing a long extension and possibly no Brexit at all.