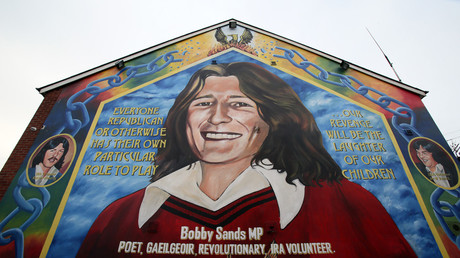 The mother of IRA hunger striker Bobby Sands has died more than 36 years after her son led the infamous 1980s campaign at the Maze prison in Northern Ireland.

Bobby Sands died on May 5, 1981, at the age of 27, following a 66-day hunger strike. His death came less than a month after he was elected as an MP for Fermanagh and South Tyrone – the first electoral victory for militant Irish republicanism.

Sinn Féin President Gerry Adams led tributes to Rosaleen Sands, describing her as a strong, inspirational woman “who, like all families of the hunger strikers, bore immense pain but stood by her son Bobby during the darkest of times.”

“In many ways she epitomised what all the mothers of the hunger strikers endured and her sacrifice will never be forgotten,” he added.

Sands, who was in her early 90s, was praised for the courage and restraint she showed in her son’s death.

”I appeal to the people to remain calm and have no fighting, and cause no death or destruction,” she said. ‘‘My son is dying. But he has offered his death to improve conditions, not to cause death outside.”

“Lord thou art hard on mothers
We suffer in their coming and their going
And tho I grudge them not, I weary, weary
Of the long sorrow – And yet I have my joy
My sons were faithful, and they fought.”- PH Pearse pic.twitter.com/uq9f5jdcCV

I’m so sorry to hear of the death of Rosaleen Sands, Bobby’s mother. Her courage, strength and dignity was an inspiration to me as a child in the 80’s, may she rest in peace. Ar dheis Dé go raibh a anam.

Bobby Sands’ father died in 2014 at the age of 91. Sands was the first of 10 republicans to die on hunger strike at the Maze Prison. The 1981 hunger strike centered on five demands regarding prisoner rights including the right not to wear a prison uniform and the right to organise educational and recreational pursuits.

The Chairman of the National H-Block/Armagh Committee, blamed the British government for the H-Blocks protests, saying at the time that he hoped the death of Sands would lead to action before other prisoners died.

The British press presented the strike as a publicity stunt as opposed to a political protest and dubbed the starving men as “H-block terrorists,” echoing Prime Minister Margaret Thatcher’s stance that  “a crime is a crime, is a crime.”

The hunger strike movement – a culmination of a five-year protest by the Republican prisoners, was followed by a new surge of Provisional IRA recruitment and activity.